What’s Behind the Struggle Over the Supreme Court 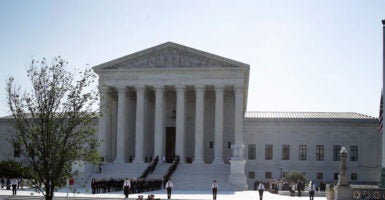 An unprecedented fight over judicial power is taking place on Capitol Hill as part of fierce partisan opposition to President Donald Trump, legal experts said Tuesday at a gathering of conservatives in Washington.

“The framers of our Constitution designed the judiciary to work a certain way, and the conflict in the last 50, 60 years has been whether to keep or reject a design that they gave us,” he said at the leading think tank’s annual President’s Club meeting.

The conflict can be seen in Technicolor given the unprecedented amount of opposition Trump has encountered in nominating judges for federal courts, said Jipping, also deputy director of Heritage’s Meese Center for Legal and Judicial Studies.

“Almost 90% of President Trump’s nominees have been opposed for confirmation,” Jipping said. “And more serious than that, an average of less than 3% of previous presidents’ nominees were confirmed with more than 25% opposition.”

Jipping worked in the Senate for 15 years, including on the staff of Sen. Orrin Hatch, R-Utah, and as the now-retired senator’s chief counsel on the Senate Judiciary Committee. He said the heated opposition to Trump hasn’t happened before.

“I know that that level of opposition is by historical standards,” Jipping said, adding:

Senators vote against nominees of the other party’s less than 2% of the time. On the average, it’s [now] 46.

Now see if you can wrap your mind around this: It took the Senate 225 years and almost 3,700 [judicial] confirmations to rack up as many no votes as what has been cast in the last three years against President Trump.

Mollie Hemingway, senior editor at the The Federalist and a contributor at Fox News Channel, joined Jipping on the rule of law panel.

“We … were concerned about the very notion of justice itself being on trial, watching so many people who should have known better throw out due process and presumption of innocence for partisan political gain,” Hemingway said. “It was pretty horrifying. And not just people in positions of power on the Hill, but also many people in the media.”

Hemingway said she saw a thread of commonality in the brutal Senate confirmation process for Kavanaugh and the uncorroborated allegations of sexual assault he faced and similar allegations against Justice Clarence Thomas during his confirmation hearings in 1991.

“I think it was in The New York Times [that] there was a poll showing that by a 2-to-1 margin, Americans believe Justice Thomas over his accuser,” Hemingway said, adding:

And yet what happened since 1991 is you have this unrelenting campaign to rewrite history. Their movies and books and the same so-called documentaries … and never-ending assault on the actual history in favor of a false narrative. I saw just yesterday that CNN is having a program where [Thomas accuser] Anita Hill will be interviewed by Christiane Amanpour. It’s been many decades, and they will never give up that fight.

Hans von Spakovsky, the manager of Heritage’s Election Law Reform Initiative at the Meese Center for Legal and Judicial Studies, said the left also is violating the rule of law when it comes to election integrity.

Von Spakovsky said the left is working to go to further extremes that will violate the integrity of elections.

“All of these liberal organizations [are] trying to prevent voter ID from coming in,” he said, adding:

And they are also pushing the next line: All of these very dangerous reforms.  Automatic voter registration, which automatically in places like California registers people who shouldn’t be voting by citizens. Same-day voter registration, which allows people to show up in a polling place on Election Day, register and vote immediately without election officials being able to check who they are, whether they really live in the state, etc. Vote harvesting. That is a very bad process.

The issue of election integrity is so important to him not just because he tracks the issue in his employment, von Spakovsky said, but also because it’s personal to him.

“My mother grew up in Nazi Germany, my father was Russian and he escaped dictatorship,” von Spakovsky told the audience. “And the one thing I learned from them is how vulnerable democracy is, and how hard we have to work to preserve it. And the key is making sure that we preserve fair and secure elections.”

The President’s Club meeting, held each fall, brings together The Heritage Foundation’s biggest donors to network with and hear from leaders in the conservative movement, including lawmakers, policy experts, and commentators.

Vice President Mike Pence is scheduled to deliver the keynote address Tuesday evening at the inaugural Heritage Honors gala to top off the gathering.