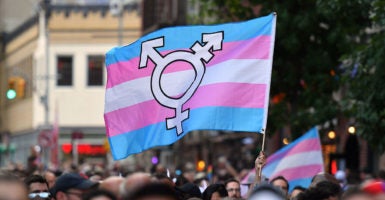 Air Canada announced that it will no longer use the phrase "ladies and gentlemen" on board its flights. (Photo: Angela Weiss/AFP/Getty Images)

Air Canada announced last week that it will no longer use the phrase “ladies and gentlemen” on board its flights. The policy is part of a “commitment to respect sexual identity, diversity, and inclusion,” the company said in an internal memo.

Instead of the gender-specific “ladies and gentlemen” (and “mesdames et messieurs”—all announcements on Air Canada are in English and French), flight attendants are to address passengers as “everybody” and “tout le monde.”

Most other people are not.

Needless to say, Air Canada never polled its passengers or its employees. The left believes in democracy only when it wins a popular vote. When it loses a popular vote, it regards democracy as defective.

A perfect example is the attempt by the left in Britain and the rest of Europe to overturn the British people’s vote in favor of leaving the European Union (also known as Brexit). Because the left lost, it regards that exercise in democracy as invalid.

Everyone knows that had there been a vote among Air Canada passengers—say, all those enrolled in the airline’s frequent flier program—even liberal Canadians would have voted to retain “ladies and gentlemen.” Even the infinitesimally small number of Canadians who are transgender would almost all vote to retain “ladies and gentlemen.” Remember, transgender individuals strongly identify as male or female —they simply reject their biological sexual identity.

They are allegedly making the most rare of all human beings comfortable: those with no sexual identity. And not even every member of that group would vote to have Air Canada drop “ladies and gentlemen.”

I recently interviewed one such individual on my radio show, professor Camille Paglia, one of the major thinkers of our time. She told me she identifies as neither female nor male but she thinks society is going mad in its rush to obliterate male and female.

The truth is no one but LGBTQ activists (including their cisgender heterosexual supporters) approve of Air Canada’s change.

So why did Air Canada do this?

To feel good about itself and buy goodwill with some of the most powerful social forces in the English-speaking world: LGBTQ activist groups. Big-business leftism—like Citibank’s recent video featuring the hurt and angry reactions of young girls (around ages 10 to 13) when told women are “paid less than men” for the same work—can best be described as moral onanism.

There are no other reasons for Air Canada’s decision. Air Canada has offended nearly all its passengers—male, female, straight, gay, and transgender—who want to be referred to as ladies or gentlemen. But this means nothing to Air Canada. And it is likely that U.S. airlines will follow suit. There is no left-wing position, no matter how radical or absurd, that hurts a business.

Only taking a conservative position can hurt a business. The owner of Chick-fil-A believes in the only sex-based definition of marriage that has ever existed—the union of male and female—and is boycotted, closed down, or never allowed to open. That Chick-fil-A hires and serves gays, including married gays, makes no difference to left-wing haters.

Forbes reported last week that just eight days after a new Chick-fil-A was opened for business, “the Oracle shopping mall in Reading, outside London … yanked its lease. … The outlet in Reading, about 35 miles from London, was an effort to test the metropolitan area’s waters. But, campaigners from Reading Pride, an LGBT organization, called for a boycott of the American brand because of its foundation’s support of groups they say are hostile to gay rights.”

Air Canada will pay no price for a decision that insults the vast majority of its clients and undermines one of the most beautiful and essential building blocks of civilization: the existence, and even celebration, of the two sexes.

No company pays a price—from Air Canada to Citibank to Gillette (whose “toxic masculinity” video was a “screw you” to nearly all its male clients) to Nike (which has appointed as its national spokesman a football player who won’t stand for the national anthem and loathes America).

Such is the power and stranglehold of the left today — in big business as much as in journalism and our schools. This is not new. As the famous quote attributed to (but perhaps not actually said by) Lenin put it, “The capitalists”—in this case, Western businesses—”will sell us the rope with which to hang them.”

If the West sinks, you can thank big businesses like Air Canada as much as the universities and the media.