US Is at a Moral Crossroads, Rep. Louie Gohmert Warns 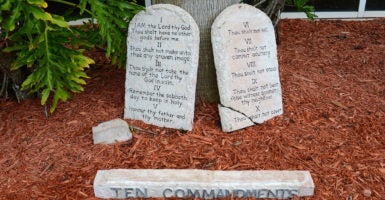 Rep. Louie Gohmert says that in the past, America has seen itself as a Christian nation founded on the moral principles of the Bible. Pictured: The Ten Commandments are displayed before the start of a Tea Party Unity Rally at The River at Tampa Bay Church ahead of the Republican National Convention in Tampa, Florida, Aug. 26, 2012. (Photo: Robyn Beck/AFP/Getty Images)

Rep. Louie Gohmert is warning that America stands at a moral turning point.

“We are near the end of the road of no return. There’s still time to get back on track, but not a lot of time,” the Texas Republican told attendees Saturday at the annual Values Voter Summit at the Omni Shoreham Hotel.

Gohmert said that in the past, America has seen itself as a Christian nation founded on the moral principles of the Bible. Those principles taught people how to live up to the responsibilities that freedom requires, he said.

The Texas lawmaker cited history and Supreme Court debates to underscore his point.

“If you go back to 1892, the U.S. Supreme Court was taking up this issue of ‘Are we a Christian nation or not?’ and after pages of references, they came to this quote,” he said. “‘These and many other matters which might be noticed, add a volume of unofficial declarations to the mass of organic utterances that this is a Christian nation.’”

Gohmert added that that perspective “didn’t mean everybody was Christian, but it meant a majority was.” As a result of that moral heritage, the Texan said, Americans—both religious and nonreligious—have experienced freedom.

However, many Supreme Court decisions since have eroded the moral foundation for freedom, he said.

“We’ve gotten away from teaching morality, right and wrong. There were 10 good commandments that used to hang in schools around the country, courthouses,” he said. “And then we had an oligarchy we sometimes call the Supreme Court that got involved and said, ‘We don’t care what our history is.’ We have seen morality failing to be taught.”

Gohmert said that this change of worldview has far-reaching consequences.

He cited how the case of R.G. and G.R. Harris Funeral Homes Inc. v. Equal Employment Opportunity Commission, now before the Supreme Court, could change America.

The case’s biologically male plaintiff worked for six years at the Michigan-based Harris Funeral Homes before coming out as transgender and asking for the right to wear dresses at work and be addressed as “Aimee Stephens.”

Stephens argues that Title VII of the Civil Rights Act of 1964, which bars discrimination based on sex, extends to transgender people. The case was heard on Oct. 8, and the court’s decision, expected next June, could have dramatic consequences for religious freedom.

“If the plaintiffs win this case before the Supreme Court, the first part of the First Amendment will be gone,” Gohmert said of the freedom of religion. “You will not have the freedom to believe what Moses and Jesus said about sexuality.”