How One US Agency Fights Religious Persecution Around the World 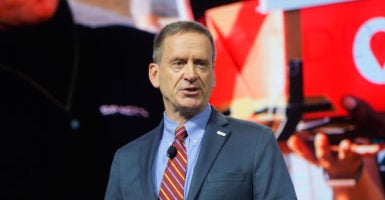 “The assistance that USAID provides to people across the world—it’s an expression of American compassion, but it’s also a reflection of our history and our values,” USAID Administrator Mark Green says at the Values Voter Summit. Pictured: Green speaks Sept. 24 during the 2019 Concordia Annual Summit in New York City. (Photo: Riccardo Savi/ Stringer/Getty Images)

The head of the U.S. Agency for International Development told social conservatives Friday about its work to curb threats to religious freedom around the world.

“The assistance that USAID provides to people across the world—it’s an expression of American compassion,” Mark Green said at the Values Voter Summit in Washington. “But it’s also a reflection of our history and our values.”

“We aim to reinforce ethnic and religious pluralism where it has historically existed,” Green said. “Our work isn’t about the content of faith. It’s about society’s tolerance for multiple faith traditions and the individual’s right to freedom of conscience.”

Green emphasized the importance of prayer and faith since America’s founding, and detailed the work of USAID while talking about efforts to support groups that suffer religion-based violence throughout the world.

A former U.S. ambassador to Tanzania, Green described his travels to Africa and the Middle East, where the terrorist army called the Islamic State has committed atrocities against religious minorities.

He stressed the important of USAID’s work to help groups such as the Yazidis and Christians in Northern Iraq.

The agency also assists persecuted groups in Asia, extending U.S. support to the Rohingya in Myanmar (formerly Burma) and the Uighurs in China, he said. Both Muslim minority groups have faced massacres and internment camps under the Chinese government because of their religious beliefs.

“I visited with Muslim Rohingya who were brutally victimized through extrajudicial killings, rape, and torture, displacement and destruction,” Green said. “Nothing short of an ethnic cleansing campaign, all driven by intolerance and sectarian hatred.”

“Beijing is determined to strip Uighurs and others of their individuality, their identity, and yes, their faith,” he added, speaking of China’s crackdown on Muslim minorities.

Green went on to highlight the scourge of religious persecution in other parts of the world, including rampant anti-Semitism in Europe and attacks on the Catholic Church in Nicaragua.

Affirming the Trump administration’s commitment to protecting religious liberty throughout the world, Green said persecution of these groups, regardless of their individual beliefs, represents a threat to religious freedom everywhere. He argued that the U.S. plays a key role in protecting the liberties enshrined in American culture and founding documents.

Green showcased a mosaic made by religious refugees in Madaba, Jordan, as thanks for USAID’s support and protection in the region.

The USAID administrator concluded his speech with biblical references about extending charity to those in need.