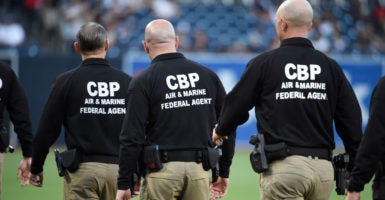 The acting commissioner of Customs and Border Protection says that nearly 1 million “enforcement actions” took place on the southern border in the past fiscal year.

At a White House briefing Tuesday, Mark Morgan revealed the latest border apprehension statistics and what the Trump administration is doing to control the immigration crisis.

“CBP’s enforcement actions on our southwest border totaled nearly 1 million in fiscal year 2019. This is a staggering 88% higher than the number of enforcement actions in 2018,” Morgan said. “These numbers are numbers that no immigration system in the world is designed to handle, including ours.”

Morgan’s comments came after the close of fiscal year 2019, which ended Sept. 30.

Not only did the U.S. government experience a demonstrably high number of migrants last fiscal year, but it was also faced with a new type of demographic reaching the border than in previous years, further complicating the country’s beleaguered immigration system.

The arrival of family units in fiscal year 2019 “more than tripled” any previous year in history, the Customs and Border Protection chief revealed.

“Our Border Patrol facilities were not designed to hold families or children,” Morgan said. “They were designed as police stations. And because of that—because of the new demographic of families and children—those resources became strained, and our limited resources had to be diverted from their law enforcement duties securing the border to address the humanitarian crisis.”

Morgan placed blame for the crisis on the U.S. immigration system, which he said is filled with “loopholes.” The result, he said, was hundreds of thousands of migrant families who were “told, coached, and made to believe” that they would be able enter the U.S. if they reached the border with a child.

However, Morgan noted the recent drop in apprehension numbers and how it was a result of President Donald Trump’s work at home and abroad with neighboring governments.

“This September marked the lowest number of law enforcement actions during fiscal year 2019. The total number of law enforcement actions last month was just over 52,000—down almost 65% from the peak in May of 144,000. This represents the fourth month in a row of a steady decline in apprehensions,” Morgan said, calling it an “unprecedented” achievement.

Law enforcement actions encompass border arrests and inadmissibles, those who arrive at the border and are sent back.

Morgan, who Trump tapped in May to lead Customs and Border Protection, touted several initiatives the administration launched as reasons for the sharp decline. For example, authorities have sent over 51,000 asylum-seekers who arrived at the southern border back to Mexico to wait for their claims to processed under migrant protection protocols.

The administration has not only worked with Mexico to step up its own enforcement capabilities, but it has also secured asylum deals with the three Central American countries that are home to the vast bulk of migrants currently reaching the border—Guatemala, Honduras, and El Salvador.

Morgan also touted the progress of wall construction on the U.S.-Mexico border, noting that crews have constructed about 71 miles of new barriers and that the administration plans to have roughly 450 miles of wall built by the end of 2020.