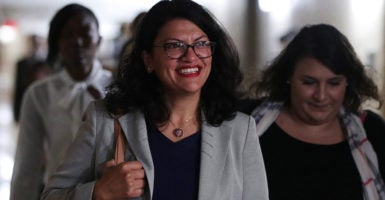 Detroit’s chief of police is calling out as “racist” and “insulting” a freshman congresswoman’s criticism of his department’s facial recognition system and the personnel who operate it.

During a recent visit to the police department, the first-term lawmaker said that “analysts need to be African Americans, not people that are not.”

Detroit’s population is nearly 80% black, according to the Census Bureau.

Detroit Police Chief James Craig, who is black, defended the professionalism of the analysts who use the facial recognition system. Craig added that if he had said what Tlaib said, people would be outraged and “they would be calling for my resignation.”

Tlaib toured the facility Oct. 3. Craig had invited her to do so after remarks she made Aug. 20 in a tweet criticizing the technology, saying “@detroitpolice You should probably rethink this whole facial-recognition bull—-.”

Tlaib toured the center, which monitors live footage from video cameras on traffic lights, businesses, and elsewhere around the city. Craig and facial recognition analysts showed Tlaib the software used to identify suspects in crimes.

Facial recognition technology identifies people from live or recorded video or photos, and it compares a person’s facial features with those in a database of photographs of faces or official mugshots.

The tour, which lasted more than an hour, prompted some contention between Craig and Tlaib over the software, and particularly whether only blacks should work in the crime center to analyze photos flagged by the software.

“I’ve seen it even on the House floor: People calling Elijah Cummings ‘John Lewis,’ and John Lewis ‘Elijah Cummings,’ and they’re totally different people,” Tlaib said. “I see it all the time, and I love them because they go along with it.”

Cummings and Lewis are bald, black Democratic congressmen from Maryland and Georgia, respectively.

Following Thursday’s tour, though, Tlaib told Detroit’s WDIV-TV: “This is me protecting my residents. My residents asked me to do my job, and my job is to make sure they’re not going to be misidentified, or detained, or falsely arrested because he’s using broken technology.”

Craig said, also on WDIV-TV, that Tlaib’s comments were “insulting” toward the white analysts on his staff.

Craig spoke of a conversation he had with the vice president of the Detroit Police Officers Association union, Ronald Thomas, who the chief said was “infuriated.”

Craig quoted Thomas as saying: “We would rather that [Tlaib] fight for us, to get us more money, or more jobs.”

The chief added of the union, “And they said, you know, their support for her is in question at this point.”

Tlaib isn’t backing down, however.

“I stand behind my comments that facial recognition technology is broken and that relying on an analyst that might not be reflective of the suspect is flawed in itself as well,” she said.

In 2017, the Detroit City Council approved $1 million in funding to purchase the facial recognition software from DataWorks Plus, a company based in Greenville, South Carolina.

The Detroit Board of Police Commissioners on Sept. 19 approved policies governing use of the technology after some criticism from skeptics.

Although the facial recognition technology would assist law enforcement in solving crimes, critics have raised violation of privacy as an issue.

In California, state lawmakers passed a bill that would impose a three-year moratorium on use of facial recognition technology on police bodycams. The bill is before Gov. Gavin Newsom, a Democrat, who has until Oct. 13 to sign or veto it.