Staying in Trump’s DC Hotel Does Not Equal Corruption. Here’s Another Possibility. 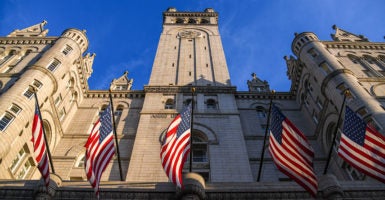 The Trump International Hotel is one of two five-star hotels in Washington, D.C., according to Forbes. (Photo: Jonathan Newton / The Washington Post via Getty Images)

Why do so many international jet-setters, European diplomats, venture capitalists, and other well-heeled travelers stay at the Trump International Hotel in Washington, D.C.?

Could it have anything to do with the fact that it’s just better than virtually every other hotel in town?

Apparently, that thought has never crossed the minds of those who claim that people book rooms and events there simply to curry favor with—and enrich—President Donald Trump.

That assumption led House Democrats to hold yet another hearing Sept. 25 alleging that, because Trump is part-owner of the company that owns the hotel, he is violating the emoluments clause of the Constitution.

That’s nonsense on steroids. The popularity of the hotel rests entirely on its quality—and the nonpolitical law of supply and demand.

Let’s stick to the facts, shall we?

First, let’s see what the emoluments clause has to do with part ownership of a hotel.

The Framers of the Constitution didn’t like the fact that foreign monarchs gave American diplomats, such as Benjamin Franklin, valuable gifts to try to influence them. So, they put two provisions in the Constitution that prohibit federal officials from accepting gifts and emoluments from foreign governments, as well as from state governments or from the federal government.

As the Supreme Court held in an 1850 case, an emolument was “compensation or pecuniary profit derived from a discharge of the duties of the office.”

In other words, a president can’t receive gifts and presents over and above his salary from other governments for services rendered in the president’s official capacity. But it was not meant to bar a president from owning businesses in which customers and consumers—including foreigners—pay the fair-market value of products or services they received in an open exchange.

That would include paying for a hotel room in a luxury hotel in Washington.

Now, let’s consider why people stay at the Trump International Hotel. The most salient fact here is simply this: It’s a five-star hotel, and five-star hotels are rare.

According to Forbes, London has only 13 five-star hotels; Paris has 11; New York City has 10; and Hong Kong and Los Angeles are tied at seven apiece.

Washington, D.C., trails them all—badly. Our nation’s capital can claim only two five-star hotels: the swanky Four Seasons in Georgetown and the Trump International Hotel in the very heart of the city.

If you don’t want to believe the Forbes ratings, how about those done by U.S. News & World Report? That magazine awards five stars to nine hotels in Washington—and, yes, one of them is the Trump International.

Given the dearth of five-star hotels in Washington, it’s no surprise that travelers who can afford to book the Trump International often do so.

Yet, partisanship turns a blind eye to this natural exercise of supply and demand, and instead sees conspiracy where none exists. Hence, last week’s hearing before a subcommittee of the House Transportation and Infrastructure Committee on Trump and the emoluments clause.

Like many Capitol Hill hearings these days, that one had an “Alice in Wonderland” flavor, where reality was lost in a haze of anti-Trump hysteria. But the essential facts are these.

Built circa 1899, the building sits on Pennsylvania Avenue in the heart of the nation’s capital. The government was losing $6 million a year on what had become a run-down building.

The company rehabilitated the building and turned it into a five-star hotel.

In 2013, three years before Trump was elected president, the General Services Administration signed a 60-year lease with the company. As a result, the government went from losing $6 million a year to gaining $3 million a year in rent. That’s a $9 million swing, a big net plus for taxpayers.

It was—and is—a win-win deal. Yet the politicians who convened the hearing are somehow convinced that only those with impure motives would stay at a luxury hotel in the heart of Washington, D.C.

Not once in the hearing did anyone point out the fact that the hotel is stunning. No one noted that travelers have been flocking there since it opened in 2016—a time when few thought Trump would ever set foot in the White House.

Sophisticated travelers with money demand top-quality facilities and service. The demand for premium-quality hotels in major cities is quite high—yet D.C. has just two, according to Forbes. Of the two, only one is a few blocks from Capitol Hill and the White House.