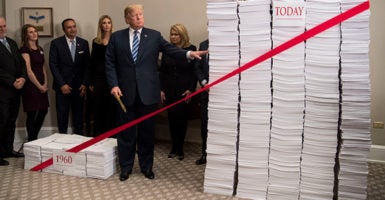 After carrying out an aggressive deregulation agenda for nearly three years, President Donald Trump has tapped his acting chief deregulator as the permanent head of the office he has overseen since March.

Trump on Tuesday evening announced his intention to nominate Paul Ray to be administrator for the Office of Information and Regulatory Affairs. Ray has been the acting administrator of the office, often referred to as “regulatory czar.”

The Office of Information and Regulatory Affairs, a division of the White House Office of Management and Budget, has been called the “most important federal agency no one has heard of.”

Trump’s first administrator of that office, Neomi Rao, was confirmed in March as a federal judge on the U.S. Court of Appeals for the District of Columbia Circuit. Rao took the seat on the appeals court formerly held by Supreme Court Justice Brett Kavanaugh.

“President Trump’s nomination of Paul Ray to lead OIRA is a great win for the American people,” a senior administration official told The Daily Signal. “His background in law and policy will help continue OMB’s unprecedented deregulation efforts—led by President Trump.”

The nomination will go to the Senate Homeland Security and Governmental Affairs Committee to hold a confirmation hearing.

Here are three things to know about Trump’s new choice for chief deregulator.

According to a White House report released in late 2018, the Trump administration in its first two years eliminated 176 regulations and added just 14.

The deregulatory efforts saved the country $33 billion in regulatory compliance costs, according to the report.

Ray is a former clerk for Justice Samuel Alito on the Supreme Court.

A native of Chattanooga, Tennessee, Ray was a private appellate litigator. He specialized in administrative law, working at Sidley Austin LLP, based in Washington, D.C.

He reportedly represented numerous high-profile clients, including the U.S. Chamber of Commerce, the National Association of Manufacturers, and the American Chemistry Council.

Ray graduated from Harvard Law School in 2011 after earning his undergraduate degree in 2008 at Hillsdale College in Michigan.

3. Counselor to the Labor Secretary

Before coming to the Office of Information and Regulatory Affairs, Ray was a counselor to then-Labor Secretary Alexander Acosta.

He supervised Labor’s regulatory reform efforts from the early days of the Trump administration until he moved over to the OMB division last year.