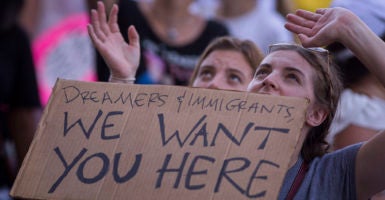 Three Obama-appointed judges ruled in one day against immigration initiatives by the Trump administration, dealing blows to the president’s effort to contain the border crisis.

In a span of several hours Friday, a judge in California ruled against the administration’s plan to detain migrant families indefinitely, another California judge blocked U.S. Immigration and Customs Enforcement from relying solely on  databases when issuing detainer requests, and shortly before midnight, a D.C. judge barred fast-track removals of illegal aliens.

All three federal judges were appointed by former President Barack Obama, revealing the heavy weight that judicial appointments play in the fight over immigration policy.

Judge Dolly Gee of the District Court in Los Angeles, appointed by Obama in 2009, issued a preliminary injunction against the Trump administration’s attempt to detain migrant families for the duration of their court proceedings. Gee found that the plan still violates the so-called Flores Settlement Agreement, which mandates release of families after 20 days.

In a 126-page ruling issued shortly before midnight Friday, Judge Ketanji Brown Jackson of the U.S. District Court for the District of Columbia, appointed by Obama in 2013, issued a nationwide preliminary injunction against the administration’s fast-track deportation of illegal migrants.

The expedited removal program allowed the government to quickly remove illegal aliens who entered the country within the past two years by bypassing immigration judges.

The Trump administration hit back hard against the string of rulings.

“For two and a half years, the Trump administration has been trying to restore enforcement of the immigration laws passed by Congress. And for two and a half years, misguided lower court decisions have been preventing those laws from ever being enforced—at immense cost to the whole country,” White House press secretary Stephanie Grisham said in a statement over the weekend.

The Department of Justice sent out three different public statements Friday, bemoaning each of the decisions that rolled back the immigration directives.

“The district court’s decision squarely conflicts with that express grant of authority and vastly exceeds the district court’s own authority. This ruling undermines the laws enacted by Congress and the Trump administration’s careful efforts to implement those laws,” a Justice Department spokesman said about the ruling on expedited removal.

The courts’ strong influence on immigration policy has been long noted.

Gee, for example, is the same federal judge who interpreted the Flores agreement in 2015 as not only applying to unaccompanied minors who cross the border, but also to accompanied minors, i.e. family units, setting the stage for the immigration fight taking place today.

Immigration experts continually have cited Gee’s 2015 decision as the main instigator in the current border crisis.

Thousands of immigrants every month, they argue, travel to the U.S.-Mexico border under the presumption that, if they bring a child, they ultimately will be allowed entry into the interior of the country.

The legal fights likely will land in the Supreme Court, where the Trump administration has found reprieve in the past.