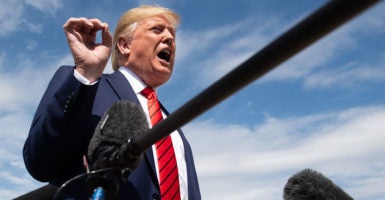 President Donald Trump speaks to reporters Sept. 26 after arriving on Air Force One at Joint Base Andrews in Maryland, upon his return from New York. (Photo: Saul Loeb /AFP/Getty Images)

A lawyer for the whistleblower who filed a complaint regarding President Donald Trump disputed a report Sunday on CBS’ “60 Minutes” saying that his client is under federal protection.

A whistleblower complaint filed in August accused Trump of pressuring Ukrainian President Volodymyr Zelenskyy to look into former Vice President Joe Biden and his son, Hunter Biden, during a July 25 phone call. “60 Minutes” tweeted Sunday that it had “obtained a letter” indicating that the whistleblower is now under federal protection.

A lawyer for the whistleblower, Mark S. Zaid, tweeted back at the news outlet, writing that it “completely misinterpreted” the contents of the letter.

NEWS ALERT: 60 Minutes completely misinterpreted contents of our letter, which is now published online at https://t.co/HjmBrEQLEi. Nor have we, as we stated earlier today, reached any agreement with Congress on contact with the whistleblower. Discussions remain ongoing. https://t.co/3XSwmtuRrn

“Tonight, ’60 Minutes’ has obtained a letter that indicates the government whistleblower who set off the impeachment inquiry of President Trump is under federal protection because he or she fears for their safety,” co-host Scott Pelley said.

The letter in question reads: “The purpose of this letter is to formally notify you of serious concerns we have regarding our client’s personal safety. We appreciate your office’s support thus far to activate appropriate resources to ensure their safety.”

Compass Rose Legal Group, which represents the whistleblower, added a Trump quote from Sept. 26, when the president said he wanted to know who gave the whistleblower information. He compared the individuals to spies guilty of treason.

Zaid added that no agreement has been reached with Congress about questioning the whistleblower, noting that “discussions remain ongoing.”

The House of Representatives launched an official impeachment inquiry following the surfacing of his or her complaint.

The CBS show tweeted late Sunday that it stands by its sources and reporting regarding the whistleblower.

“Is @60Minutes now asserting it has a source other than letter our legal team sent to @ODNIgov?” Zaid asked on Twitter early Monday morning. He continued on to suggest CBS “is literally making stuff up.”

CBS News gave a statement to The Daily Caller News Foundation with the same wording as the earlier tweet.

Content created by The Daily Caller News Foundation is available without charge to any eligible news publisher that can provide a large audience. For licensing opportunities of our original content, email  [email protected]