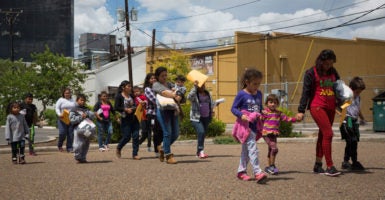 Illegal immigrants walk to a nearby Catholic Charities relief center in McAllen, Texas, after being dropped off at a bus station June 17, 2018, shortly after their release from detention through the "catch and release" policy. (Photo: Loren Elliott/AFP/Getty Images)

A federal judge has issued a tentative order against the Trump administration’s plan to detain migrant families for the entire duration of their court proceedings.

In a major blow to President Donald Trump’s agenda to curb illegal immigration, Judge Dolly Gee of the federal District Court in Los Angeles issued a preliminary ruling Friday that, at least temporarily, strikes down the administration’s attempt to detain migrant families for longer than 20 days.

Gee found that the plan violated the Flores settlement agreement, a 1997 legal agreement that set strict standards for how long migrant kids can be detained after illegally entering the U.S.

This is not the first time that Gee, appointed by President Barack Obama, has issued a major ruling related to the settlement agreement. She ruled in 2015 that the agreement not only pertained to unaccompanied children, but also to children who arrived with parents and other family members—drastically changing the dynamic of migrant detention at the U.S.-Mexico border.

Many immigration enforcement officials argue that the 2015 court decision fueled the border crisis. Communities across Central America are under the impression that if they bring a child with them, they will likely be able to enter the U.S. if they make it to the border because the U.S. government cannot detain them for too long. The situation is referred to as the “Flores loophole.”

The border crisis has led to robust child smuggling operations along the U.S.-Mexico border, and a significant number of illegal migrants are discovered to be lying about their familial relations.

The Trump administration is trying to work around this loophole by establishing its own licensing agreements for family residential centers. By doing this, the detainment centers for migrant family units would not be subject to the 20-day limit. If migrants are forced to wait in detention for the entire time of their court proceedings, the current incentive for immigrants would be largely eliminated.

However, Gee temporarily put a stop to this.

“The Department of Justice is disappointed that the court is continuing to impose the outdated Flores Agreement even after the government has done exactly what the Agreement required: Issue a comprehensive rule that will protect vulnerable children, maintain family unity, and ensure due process for those awaiting adjudication of their immigration claims,” a Department of Justice spokesman said in response to the ruling.

“The Trump administration will continue to work to restore integrity to our immigration system and ensure the proper functioning of the duly enacted immigration laws,” the spokesman said.