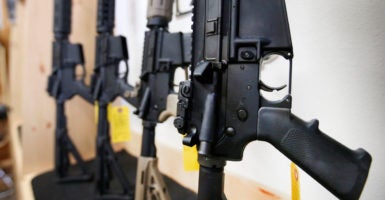 Red flag laws should be temporary in nature, and should give those who have their firearms seized a clear avenue of having those constitutional rights—and the firearms themselves—returned. Pictured: AR-15 semi-automatic guns are on display for sale at Action Target June 17, 2016, in Springville, Utah. (Photo: George Frey/Getty Images))

Recent polls show most Americans support the basic premise of disarming dangerous people through the use of so-called red flag laws.

This instinct is a sound one, but Americans should not overlook the very real hazards of poorly crafted red flag laws, which can easily turn the Constitution on its head.

To be sure, the general idea behind red flag laws is good—to better identify objectively dangerous individuals and allow court-ordered, narrow interventions to disarm these specific individuals before they can commit violent acts.

The rightful cry of Second Amendment advocates has long been that laws should keep guns out of the hands of criminals or those who are bent on violence, and refrain from broadly punishing law-abiding Americans who do not pose a risk to themselves or others.

Red flag laws, as a concept, are an effort to accomplish just that goal.

An unfortunate reality is that almost all mass public shooters were able to legally purchase their firearms despite very clear indications of dangerousness.

In some cases, official actions could have and should have been taken under existing laws to disarm these individuals, but the vast majority simply had not committed a disqualifying criminal offense or reached the threshold of mental instability necessary for an involuntary civil commitment.

Red flag laws, then, can provide a type of “gap filler” option to disarm people who are clearly dangers to themselves or to the public, but who would otherwise be permitted to possess firearms because they aren’t in a mental health crisis or haven’t already committed an atrocity.

The danger of red flag laws is not in the idea itself, but in the way many states have implemented laws that neglect any meaningful sense of due process and that fail to provide necessary safeguards against abuse or misuse.

We must ensure not just that dangerous people are disarmed, but that they are disarmed through a fair process that prevents non-dangerous individuals from inadvertently losing their Second Amendment rights as well.

One of the primary and, frankly, legitimate concerns is that these laws function to make “best guesses” as to who will commit violent actions in the future.

On the one hand, many other widely-accepted laws, such as restraining orders and prohibitions on firearm possession for those adjudicated mentally ill, are based on assessments that a particular person will likely pose a danger.

On the other hand, this is not “Minority Report,” and we don’t have a Pre-Crime Division with psychic powers.

Because of this, we must demand that red flag laws use narrow definitions of “dangerousness” that focus on patterns of objectively dangerous behaviors. In particular, laws that paint gun ownership as inherently suspect—such as by allowing judges to consider the recent purchase of a firearm as a factor indicating “dangerousness”—should be rejected. So should any broad criteria that would result in disarmament because of disfavored, vulgar, or politically incorrect speech.

Moreover, because these laws involve restrictions on a fundamental constitutional right, they should require that allegations of dangerousness meet high burdens of proof, such as clear and convincing evidence.

Other types of traditional due process protections, such as the right to an attorney and to cross-examine witnesses, should be afforded as well.

Red flag laws should be temporary in nature, and should give those who have their firearms seized a clear avenue of having those constitutional rights—and the firearms themselves—returned. This means the persons affected should know both what it is they must do to show they are no longer dangerous, and that they know the procedures they must follow to have their property returned.

Finally, these laws should not disarm people for the sake of disarmament alone. They should ultimately be about getting dangerous individuals back to a place of mental and emotional stability, where their firearms can be returned and their right to keep and bear arms fully restored.

For that reason, red flag laws should be integrated with existing mental health treatment and addiction systems, and resources provided to those who have been deemed dangerous.

Unfortunately, many states that have implemented red flag laws have neglected to provide these types of basic protections. While we should all be in favor of using a legal process to temporarily disarm dangerous people, we must refuse to do so at the expense of due process and appropriate constitutional safeguards.

In other words, Americans should be in favor of red flag laws, but only if we can properly craft them.