Why Giving Pot Pushers Access to Our Banks Is Dangerous 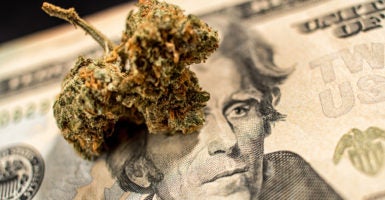 The House of Representatives is about to consider a bill called the Safe Banking Act, which, like many titles of federal laws, is completely misleading.

It should be called the “Let’s Pretend Marijuana Is Safe and Give Pot Pushers, Cartels, and Terrorist Organizations Access to Our Banking System” Act.

Don’t hold your breath for a title change. Regardless of the title, the idea behind the act ignores reality and, if passed, will lead to disastrous results.

This bill is all about protecting people and businesses who openly commit federal crimes by selling marijuana, and rewarding them by giving them access to the most important banking system in the world to further give them the patina of legitimacy.

And at the same time the House is considering this bill, the data on the impact of the legalization experiment across the country is proving just what a dangerous and bad idea legalization has become.

The Rocky Mountain High Intensity Drug Trafficking Area report on the impact of legalization in Colorado is devastating for those pushing pot. The report found:

The report also shows that the tax revenue from state-authorized marijuana sales, far from being a game-changer like pot pushers said it would be, amounted to around nine-tenths of 1% (000.9%) of Colorado’s fiscal year 2018 budget. Previous reports are just as bad.

Pot Is a Schedule I Controlled Dangerous Substance for Good Reason

Passed in 1970, the Controlled Substances Act places marijuana in Schedule I, a category reserved for drugs that are medically unhelpful and dangerous. Schedule I drugs have a high potential for abuse, have no currently accepted medical use in treatment, and a lack of accepted safety for use even under medical supervision.

The fact that the act was controversial when it was adopted, and the debate over the proper treatment of cannabis has not quieted down since then, does not negate the fact that as of today, marijuana is on Schedule I.

As Heritage Foundation scholars have written elsewhere, Congress would be irresponsible to move marijuana out of Schedule I of the Controlled Substances Act without hearing from the nation’s finest scientific minds.

States have passed so-called medical marijuana laws under the theory that pot has medicinal benefits that can’t be produced by other legal means. In making those claims, pot pushers want us to ignore the fact that today’s marijuana is one of the most genetically modified substances on the earth, has over 500 known carcinogens, has THC levels that dwarf the 1% or 2% levels from the 1970s (levels are now at 20-90% THC), and that there is zero quality, content, or dosage control in their products.

They are also counting on you not knowing that there are already three FDA-approved THC drugs, and at least five more on the way.

The dirty little secret they hide from you is that you don’t have to smoke marijuana, eat it in a brownie, or chew it in a marijuana-laced gummy bear to reap the medicinal benefits of THC. A doctor can write you a prescription for those drugs. They can’t write one for marijuana, because it is not a medicine.

The three FDA-approved drugs are Marinol, Cesamet, and Syndros. Drugs like Syndros show great promise for countering today’s dangerous “medical marijuana” movement. The companies that sell those FDA-approved drugs do, and should, have access to the federal banking system. But those who peddle pot, with sky-high genetically manipulated THC levels that have no medical benefit, shouldn’t.

Legalizing Marijuana Is Not a States’ Rights Issue

Some on the right who support the states in their push to legalize marijuana assert that doing so is a states’ rights issue.  They’re wrong.

As a Heritage Foundation scholar has written in a law review in 2018, we do not allow states to decide whether to prohibit other controlled substances, such as heroin, and there is no good reason to put marijuana in a separate category.

Since the 1938 Federal Food, Drug, and Cosmetic Act became law, the nation has authorized the FDA to decide which drugs to approve for therapeutic use.  We do not make those decisions the subject of a referendum because the decision requires expert scientific judgment of professionals in medicine and biochemistry, not the moral judgment of the populace.

But what has happened is that states have taken the law into their own hands.  Beginning in 1996, numerous states have enacted so-called medical marijuana regulatory schemes

Starting in 2012, a smaller number of states have decided to go big or go home by adopting laws, either by statute or popular referendum, that legalize the distribution and use of marijuana for purely recreational use.

In truth, that was the purpose of the medical marijuana laws all along. They (and their supporters) just weren’t open about it.

Take the original California law, the Compassionate Use Act of 1996. It authorized physicians to recommend that marijuana be used for terrible maladies such as terminal cancer, HIV/AIDS, and Lou Gehrig’s disease (amyotrophic lateral sclerosis), as well as far lesser maladies such as “any other illness for which marijuana provides relief,” which means a headache, or some other phantom ailment—perhaps having a blue day.

Say what you want about the state provisions legalizing recreational marijuana use, they didn’t disguise their intent. At least they were honest about it.

Why Giving Pot Pushers Access to Banks Is Dangerous

Speaking of deception, let’s turn back to the Safe Banking Act.

The act would ostensibly allow businesses selling marijuana in compliance with state law to take advantage of the federal banking system.

Right now, they cannot, because, by opening up accounts, the businesses and the banks would violate the federal statutes outlawing the distribution of controlled substances as well as the federal anti-money laundering statutes.

And since federal law currently prohibits pot pushers from accessing the banking system, these businesses are primarily all-cash businesses. Many use armed security guards to safeguard their drug money because they are often located in seedy parts of town where they get burglarized.

So pot vendors want to be able to deposit their cash and let purchasers use credit cards. They want to use our banking system, just like Nike, Starbucks, or Walmart do. Of course the difference is, the latter three companies sell legal products; pot pushers don’t.

Pot pushers have been seeking legitimacy for years, but have had setbacks despite the legalization of marijuana for various kinds of use in some states. Pot pushers tried to get doctors to write “prescriptions” for marijuana, even though dope isn’t a medicine or a substance regulated under the FDA. But that didn’t work. Doctors can now only “recommend” marijuana.

Substitute the word heroin, meth, or LSD with marijuana, and ask yourself this: Do you support allowing distributors of those drugs to have access to our banking system? If not, why not? They, too, are Schedule I controlled substances.

The fact is that marijuana, from a scientific standpoint, has a high potential for abuse, is not accepted as a medical treatment, and is not safe. It is a gateway drug, despite what people want you to believe.

Ask any prosecutor, public defender, defense attorney, or judge who has worked in drug court. They’ll tell you that the folks with cocaine, heroin, meth, and opioid addictions often got their “start” with marijuana.

The arguments the pot pushers have made for years about the wonderful beneficial effects of legalization have all proven wrong. All of them.

They claim that marijuana is a medicine. It’s not.

Marijuana is not like alcohol. Legalizing it has resulted in increased usage by minors, additional drug trafficking syndicates, and an increase in crime, including drugged driving and worse.

The experiment of legalizing marijuana in the states has proved a failure. All available data points to the fact that it has harmed minors and adults alike. The only people who don’t seem to care are politicians, from both parties, who seem willing to selectively ignore the science (notice the hue and cry about vaping) all because they like the money that pot brings into government coffers.

People should care about this because giving pot pushers access to our secure banking system grants further legitimacy to an illegal enterprise. If pot pushers are given access, cartels, gangs, and terrorist organizations will certainly find a way to wash their dirty money through legitimate-looking shell companies under the guise of a state-regulated pot company—and Congress will be complicit.