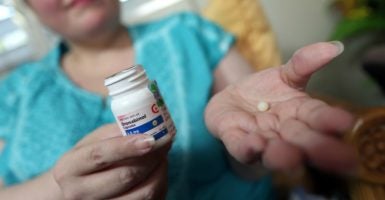 Many marijuana substitute drugs have been around since the 1980s. (Photo: Juan Luis Martinez GDA Photo Service/Newscom)

Alexandra Seymour is a member of the Young Leaders Program at The Heritage Foundation.

States have passed so-called “medical marijuana” laws under the theory that pot has medicinal benefits that can’t be produced by other, legal means.

But what if there was a Food and Drug Administration-approved drug that gave you all the benefits of the active ingredients in marijuana, such as tetrahydrocannabinol (THC) or cannabidiol?

What if that drug had been rigorously tested through clinical trials to make sure that it worked as promised, was properly dosed, and had no unanticipated side effects?

And what if you could get that lawful drug from your doctor in pill or liquid form?

Would it surprise you to know there already are three FDA-approved THC drugs and that at least five more are on the way? We suspect so, because the pot pushers—those that push smoked and edible marijuana as “medicine”—don’t want you to know about these safe alternatives.

Some of those FDA-approved drugs have been around since the 1980s.

That’s right—the dirty little secret they hide from you is that you don’t have to smoke marijuana, eat it in a brownie, or chew it in a marijuana-laced gummy bear to reap the medicinal benefits of THC.

In early July, the FDA approved Syndros as the first orally administered liquid form of THC. Like Marinol, the original oral cannabinoid to gain FDA approval in 1985, Syndros treats anorexia associated with weight loss in patients with AIDS, as well as nausea and vomiting caused by cancer chemotherapy.

Epidiolex is one drug currently on the FDA fast track. According to a recent press release from GW Pharmaceuticals, a study of 171 randomized patients suffering from Lennox-Gastaut and Dravet syndromes found that Epidiolex decreased seizure occurrence, was relatively well tolerated among patients, and generated no unexpected adverse effects.

Other cannabinoid-based medications on the international market today include Cesamet, another synthetic drug that treats nausea and vomiting stemming from chemotherapy; Cannador, which is currently used in Europe and has demonstrated potential to relieve multiple sclerosis symptoms and postoperative pain management; and Sativex, another GW Pharmaceuticals drug on the FDA fast track that treats spasticity caused by multiple sclerosis.

Since these are all medical cannabinoids, they do not require smoking. They are also safer to use because levels of THC can be monitored.

Knowing these safer alternatives exist, ask yourself: Why? Why have the pot pushers kept this secret and why don’t they want you to know this?

“The medicinal marijuana system in this country has become a bad joke, an affront to the concept of safe and reliable medicine, defying the standards that we have come to expect from the medical establishment,” Dr. Kevin Sabet, former senior adviser to President Barack Obama’s drug policy office, wrote in his book, “Reefer Sanity: Seven Great Myths About Marijuana.”

We can thank Ed Rosenthal and Richard Cowan for creating the current public perception of the so-called “medical marijuana” marketplace.

In a video filmed many years ago, which we highlighted in this 2010 blog post, Rosenthal (former editor of High Times magazine) and Cowan (former director of NORML—the National Organization for the Reform of Marijuana Law) joked about the nationwide “scam” they started. They realized that if they convinced enough people that smoking marijuana was “medical marijuana,” that would be the beginning of a movement toward full legalization.

“Once there’s medical access, if we continue to do what we have to do and we will, then we’ll get full legalization,” Cowan explained.

But, according to Rosenthal, pleasure trumps any medicinal benefit he should derive from marijuana anyway.

“There is a reason why I do use it,” he said. “And that’s because I like to get high. Marijuana is fun.”

Sabet acknowledges that THC has potential therapeutic effects, but these do not come from smoking pot. (We don’t light any of our FDA-approved medicine on fire and smoke it, after all).

With the average strength of marijuana being five to six times what it was in the 1960s and 70s, the repercussions of marijuana and legalizing it are more evident than before. Some of these include higher risks of motor vehicle accidents, heart attacks, and impaired immune systems and short-term memories. Evidently, the pot pushers don’t want you to know this truth.

“America is being sold a false dichotomy: ‘We can either stick to our current failed policies, or we can try a ‘new approach’ with legalization,” Sabet said. “Sadly, this kind of black-and-white thinking conceals the fact that there are better, more effective ways than either legalization or incarceration to deal with this complex issue.”

Cannabinoid-based drugs are better alternatives because they reap the benefits of marijuana’s therapeutic components safely, as well as have the potential to become FDA approved if they aren’t already.

So the next time a pot pusher encourages a state to enact so-called “medical marijuana” laws, or goes for full legalization in violation of federal law, ask them: Why are they pushing an unsafe, untested product instead of pushing FDA-approved THC?