Even ‘Medical’ Marijuana Has Dangers 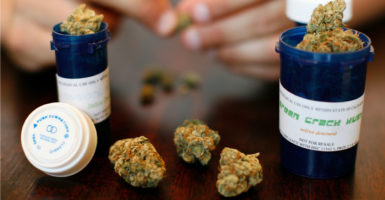 The detrimental health effects that come from a lack of regulation overshadow the “medicinal” benefits of marijuana. (Photo: Mario Anzuoni/Reuters/Newscom)

Alexandra Seymour is a member of the Young Leaders Program at The Heritage Foundation.

In a recent press release, the Drug Enforcement Administration confirmed the dangers of allowing marijuana to be grown and used freely. Indeed, the detrimental health effects that come from a lack of regulation overshadow the “medicinal” benefits of marijuana.

But in recognizing the growing interest in cannabinoids—the active ingredients in pot—for their potential to treat seizures and other neurological disorders, the DEA stated that it would increase the number of federally authorized marijuana growers.

As the DEA noted, there was never a legal way for commercial enterprises to produce marijuana for product development. There was only a single, federally authorized marijuana grower because, before the “medical marijuana” push, this was all that was needed to satisfy research demands.

Now, the DEA is allowing people to apply to grow marijuana for commercial development. Once these products are tested and proven to be safe for medical use, pharmaceutical firms will then have greater potential to produce them in the United States, without the National Institute on Drug Abuse.

This makes sense. While marijuana does have therapeutic components, these do not come from smoking pot. Rather, regulation allows these benefits to be reaped while making sure the dosage is safe, as I’ve explained here.

The DEA has acknowledged the dangers of pot and found a smart compromise. Hopefully its announcement will help the pot pushers realize this too, as they learn what real “medical marijuana” is.