A Mom’s Take on Normalizing Gun Deaths in America 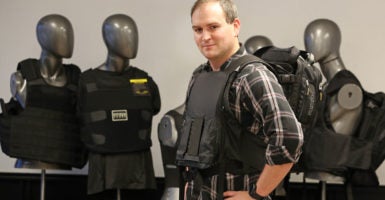 When I snapped the obligatory pictures of my seventh-grader and high school senior on the first day of school this year, it looked like pictures from years past.

They were two kiddos grinning and bearing it in another one of Mom’s memory-capturing photo shoots. However, this year their back-to-school gear included “bulletproof” backpacks.

As an entrepreneur and free-market capitalist, I appreciate the fact that companies have identified and opened a new market to generate economic growth and jobs.

As a mom who has grown terrified of the never-ending horror of school shootings, I am outraged and devastated that I even have to consider such a product in my family’s back-to-school shopping.

Today’s parents legitimately factoring in “bulletproof” backpacks has to be the final wake-up call.

The most stressful consideration that my mother had when doing back-to-school shopping for me and my sister Deana in the 1980s was whether she could afford a full-on designer wardrobe of Guess jeans, Swatch watches, and United Colors of Benetton sweaters.

Do these backpacks give parents and students a false sense of security?

Guard Dog Security, one of the manufacturers of the backpacks, recently came under scrutiny. The language used to describe these items also is being called into question. Some say bulletproof. Others say bullet resistant.

School shootings and other mass shootings have become so commonplace that after a few days of intense media coverage, the stories and tragedies shrink from the headlines. For a number of reasons, media outlets no longer cover school shootings the way they covered the Columbine High School massacre 20 years ago.

The trend to reduce the focus on the shooter and do more coverage of the victims and survivors is a real positive step. It seems like we don’t see as many profiles delving into the life and psyche of the shooters.

However, a pivot to reducing coverage of these incidents does seem to normalize and even minimize what should be recognized as hugely dramatic and shocking crimes.

If we have come to normalize school shootings and other mass shootings to the point where there is a market for bulletproof backpacks, will we ever raise an eyebrow to fatal shootings in crime-ridden places such as Chicago that never get thorough news coverage?

As citizens of the greatest country on earth, our hearts should grieve that we are becoming numb to these deaths.

But what should shock us even more are the many killings that happen almost every single day in the inner cities that we already have forgotten.