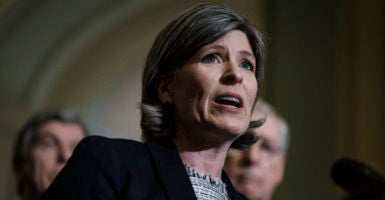 The fourth-ranking Republican in the Senate called on colleagues Tuesday to pass her legislation to reduce wasteful government spending and rein in agencies’ spending practices.

“If not spent by midnight on Sept. 30, leftover dollars expire and can no longer be used,” Ernst said. “Rather than returning the money to taxpayers, binge-buying bureaucrats are wasting billions of taxpayer dollars needlessly.”

The federal government’s fiscal year ends Sept. 30, and Ernst’s legislation, called the End of Year Fiscal Responsibility Act, would end agencies’ annual 11th-hour sprints to spend all their budgeted money before the fiscal year runs out.

Her bill would curb how much an agency could spend in the last two months of the fiscal year to no more than what the agency usually spends each month on average during the rest of the year.

“This bill won’t end all wasteful spending, but it will force agencies to put more thought into long-term planning and curtail the bad habit of out-of-control impulsive spending,” Ernst said.

“With our national debt now surpassing $22 trillion, Washington should be looking for ways to save by canceling or delaying unnecessary expenses, rather than splurging on end-of-year wish lists,” Ernst said.

Another piece of legislation pushed by Iowa’s junior senator would keep her colleagues from returning home until they passed a budget.

“Through my No Budget, No Recess Act, members of Congress would be prohibited from leaving Washington if we fail to pass a budget by April 15 or approve regular spending bills by Aug. 1,” she said.

The government must stop enabling agencies to spend money that shouldn’t be spent, Ernst added:

The way we’re doing business is incentivizing federal agencies to rush and spend the rest of their money as quickly as possible. And it makes it all the more likely that they’ll waste money on unnecessary goods and services.