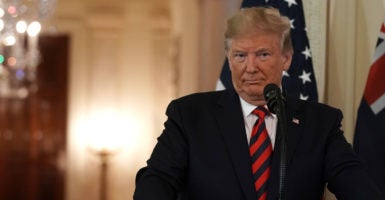 A federal district court judge has blocked California from enforcing a law requiring a presidential candidate to provide five years of tax returns to be eligible to appear on a primary ballot. Pictured: President Donald Trump participates in a joint news conference with Australian Prime Minister Scott Morrison in the East Room of the White House Sept. 20, 2019, in Washington, D.C. (Photo: Alex Wong/Getty Images)

We’re all used to seeing California throw its weight around, but its new law requiring a presidential candidate to provide five years of tax returns to be eligible to appear on a primary ballot is a new low. Now, however, a federal district court judge has blocked the state from enforcing it, at least temporarily.

It’s the right decision. The law is nothing more than a political attack on President Donald Trump, the federal elections process, and the right of free association of citizens and all political parties.

California is weighing its options, but if it chooses to appeal, the 9th U.S. Circuit Court should affirm the district judge’s decision because the law violates the presidential Qualifications Clause and the First Amendment of the Constitution.

The Qualifications Clause in Article II, Section 1 sets out the sole requirements to be president of the United States. You must be a “natural born Citizen,” 35 years of age, and a resident “within” the U.S. for 14 years.

The key case on this is U.S. Term Limits, Inc. v. Thornton (1995). There was a movement across the country in the late 1980s and early 1990s to impose term limits on members of Congress. This political movement ended, however, when the U.S. Supreme Court held in Thornton that an Arkansas law limiting the number of terms that a member of Congress could serve was a violation of the separate Qualifications Clauses that apply to members of Congress.

The Arkansas law provided that once a representative or senator reached the maximum term, he could not have his name “placed on the ballot”—a ballot-access restriction akin to California’s new law.

Arkansas was adding an additional qualification to being a representative or a senator; the court, in a 5-4 opinion written by Justice John Paul Stevens, said that “States lack the power to impose qualifications.” Although the Thornton case dealt with congressional elections, the same constitutional consideration would apply to presidential elections and the presidential Qualifications Clause.

Arkansas also tried to argue that the term limit was not an additional qualification, but simply a ballot-access requirement. But the court disagreed. States can “adopt generally applicable and evenhanded restrictions that protect the integrity and reliability of the electoral process itself.” States have the right to implement rules that are intended to avoid “voter confusion, ballot overcrowding or the presence of frivolous candidacies.”

But what states cannot do is try to disguise additional qualifications as ballot-access requirements.

In another decision in 1983—this time involving Ohio—the Supreme Court in Anderson v. Celebrezze (also a 5-4 decision written by Stevens) threw out a March filing deadline for a presidential candidate to appear on the November ballot. The deadline placed an unconstitutional burden on the voting and associational rights of supporters of a candidate in violation of the First Amendment.

According to the court, “state-imposed restrictions implicate a uniquely important national interest” since “the President and the Vice President of the United States are the only elected officials who represent all the voters in the Nation.” Thus, “in a Presidential election a State’s enforcement of more stringent ballot access requirements” have “an impact beyond its own borders.”

So states have far less power to regulate presidential elections “than statewide or local elections, because the outcome of the former will be largely determined by voters beyond the State’s boundaries.”

Similarly, in 2001, in Cook v. Gralike, the Supreme Court, this time in a unanimous opinion written by Stevens, said that the authority of states is limited to regulating election procedures. The acceptable regulations are those necessary to impose “some sort of order, rather than chaos” on the “democratic process” as well as to protect the integrity of elections.

The new California law says its purpose is to “provide voters with essential information regarding the candidate’s potential conflicts of interest, business dealings, financial status, and charitable donations” so they can “make a more informed decision.” Gov. Gavin Newsom said in his signing statement that states “have a legal and moral duty to do everything in their power to ensure leaders seeking higher office meet minimal standards, and to restore public confidence.”

The law’s stated purpose reveals that it has nothing to do with regulating the “reliability of the electoral process itself” and ensuring orderly voting procedures. Newsom’s statement about the law imposing “minimal standards” also shows the law isn’t about protecting the voting process—it’s about imposing California’s minimal qualifications on anyone who wants to be president.

California passed a similar bill two years ago. When then-Gov. Jerry Brown vetoed the bill, he not only acknowledged that it might “not be constitutional,” but he expressed his concern “about the political perils of individual states seeking to regulate presidential elections in this manner.” He called it a “slippery slope.” Tax returns now, but what else might states start to demand he said. Health records? High school report cards? Certified birth certificates?

All of that might depend, as Brown warned, “on which political party is in power” and it could “lead to an ever-escalating set of differing state requirements for presidential candidates.”

Neither California nor any other state has the right to impose additional requirements for presidential candidates, whether they categorize them as “qualifications” or as restrictive ballot-access requirements.

In Anderson and Burdick v. Takushi, the Supreme Court laid out a framework for analyzing First Amendment challenges to state election laws. Under that analysis, California’s law causes significant harm to its citizens’ First Amendment rights because it denies members of a political party the opportunity to vote for a constitutionally qualified candidate of their choice.

The fact that Republican primary voters could write in Trump’s name on the ballot doesn’t save the law. The Supreme Court has repeatedly held that a write-in “is not an adequate substitute for having the candidate’s name appear on the printed ballot.”

California says it has an interest in “ensuring that its voters make informed, educated choices.” That is not a legitimate state interest and can be seen as a pretext for animus against Trump. The right to choose elected representatives belongs exclusively to the people, and it is the people, and not the states, who have the right to educate themselves about their candidates however they see fit.

When a state, like California, chooses which of a candidate’s characteristics to educate the people about, it impermissibly substitutes its judgment for the people’s judgment. This law is an unnecessary burden on the public’s First Amendment rights. The law does not educate voters: It punishes candidates who refuse to comply.

In essence, California’s law deprives voters of their right to vote for any constitutionally qualified candidate of their choosing simply because California has decided, in its infinite wisdom, that tax returns matter more than any other information that voters might care about.

The First Amendment does not allow that.