Coming to a Soccer Team Near You: Rainbow Shoelaces 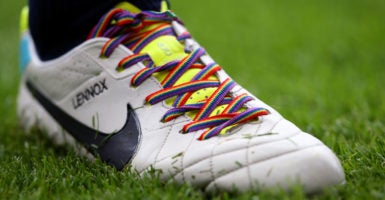 Young soccer players in the U.S. are being urged to don rainbow shoelaces such as those worn here by Everton's John Heitinga in England in support of a campaign against homophobia. (Photo: Stephen Pond/PA Images/Getty Images)

Since the Supreme Court ruled in 2015 that same-sex marriage is legal nationwide, the LGBT movement not only has instigated lawsuits alleging discrimination, but has committed to cultural influence, too, particularly targeting America’s youth.

United Soccer Coaches dubbed Sept. 16-22 as Pride Week for the third year in a row.

A portion of the organization’s website reads: “Teams across the country can show their support for athletes and coaches in the LGBTQ+ community by wearing rainbow laces. Laces are available upon request for all United Soccer Coaches members at the club, high school or collegiate level.”

Founded in 1941, United Soccer Coaches boasts that the organization is the “world’s largest soccer coaches’ organization that serves members at every level of the game,” so the group has a significant level of influence on soccer players, coaches, and parents.

The organization also encouraged players to post and tag their participation in gay pride on social media as #PlayWithPride.

FIFA, the international governing body for soccer, has adopted guidelines for symbols and expressions on uniforms. FIFA rules state: “Equipment must not have any political, religious or personal slogans, statements or images.”

Although the United Soccer Coaches organization is a privately funded group and therefore not bound by the same restrictions of a government entity as far as promoting ideologies, one still wonders: Why must any athletic organization adhere to a specific ideology and promote that?

Even if the United Soccer Coaches organization is free to do this—and that’s not entirely clear based on what the FIFA guidelines say—what purpose does it serve young athletes for the organization to latch onto and promote the LGBT lifestyle among any others?

According to Pew Research, over 60% of Americans align with Judeo-Christian values that typically don’t espouse LGBT views. Children who hold any kind of Christian faith would feel conflicted at the least, or could be bullied for failing to participate in something that contradicts their religious beliefs.

Political movements are important and have a time and place. But this is the antithesis of the purpose of competitive sports, which should encourage sportsmanship, fitness, and health.

Not only is this political movement entirely unrelated to soccer, but many aspects, particularly the transgender lifestyle, can be confusing, if not damaging, for young people to pursue.

Replace the United Soccer Coaches’ relationship with the LGBT movement with any other political cause couched in controversy, such as Black Lives Matter or Campus Crusades for Christ, and it’s obvious how misguided such an alliance really appears.

Athletics, competition, and sportsmanship are a healthy part of young people’s lives. They should remain separate from advocacy couched in political agendas, particularly an ideology that could relay discomfort or harm, or conflict with a person’s values.