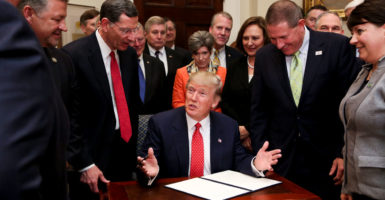 Help is on the way for homeowners and landowners, businesses, developers, and farmers who have been victimized by “regulatory uncertainty” and federal “overreach,” Trump administration officials told business leaders Thursday.

EPA Administrator Andrew Wheeler and R.D. James, assistant secretary of the Army for civil works, joined members of Congress and leaders of trade associations to announce the completed repeal of the Obama administration’s so-called Clean Water Rule of  2015.

The much-criticized rule had expanded the definition of “waters of the United States”—or WOTUS—under the Clean Water Act.

The Trump administration’s announcement, which drew criticism from environmental groups, was made before an audience at the National Association of Manufacturers, a trade group based in Washington.

“When President Trump took office, he set in motion a process to remove and replace regulatory burdens that were stifling American innovation and economic development,” Wheeler said, adding:

The Obama administration’s Waters of the United States definition was at the top of the list.

We are gathered here today because EPA and the Army [Corps of Engineers] are officially repealing the 2015 definition. Today’s final rule puts an end to an egregious power grab, eliminates an ongoing patchwork of Clean Water Act regulations, and restores a long-standing and familiar regulatory framework while we consider public comments on our proposed revised definition of waters of the United States.

We are delivering on the president’s regulatory-reform agenda.

>>> Commentary: Why Flushing the ‘Clean Water Rule’ Was the Right Thing to Do

Bonner Cohen, a senior fellow with the National Center for Public Policy Research, told The Daily Signal in an email that the Obama administration had overstepped its authority with its version of the WOTUS rule.

“Under the guise of ‘clarifying’ two ambiguous Supreme Court rulings from the early 2000s, the Obama administration concocted an elaborate scheme that would have subjected millions of acres of private land to federal zoning,” he said, adding:

Two federal court decisions in the last three months—one in Texas, the other in Georgia—found that the Obama plan to regulate wetlands went far beyond what the Clean Water Act allows.

The confusion over what qualifies as ‘waters of the United States’ under the [Clean Water Act] has bedeviled farmers, ranchers, homebuilders, and others involved in natural resources-related businesses for years.

While the Obama plan empowered unaccountable federal bureaucrats, the Trump initiative strikes a blow to the administrative regulatory state and lifts a huge burden from rural communities all across the country.

Daren Bakst, a senior fellow with The Heritage Foundation, said in a written statement that the Trump administration’s rule change will help to restore the rule of law in an area where it had gone missing.

“The EPA and Army Corps of Engineers protect our nation’s waters best when they define what waters are regulated under the Clean Water Act in a manner consistent with the law itself, the U.S. Constitution, and a recognition that clear and objective definitions achieve positive environmental outcomes,” Bakst said, adding:

The Obama Clean Water Rule—notorious for garnering widespread opposition—failed on all counts.

In an unprecedented power grab, this rule handed federal bureaucrats authority to regulate almost any water imaginable—creating unnecessary regulatory obstacles for everyone from farmers plowing their land to local governments building ditches for public safety to families building their homes.

By repealing this rule, the Trump administration has rightfully put an end to this definition of ‘waters of the United States’ that made the EPA and [Army Corps of Engineers] more similar to local zoning boards than federal regulators.

As the administration formulates its own, more appropriate definition of ‘waters of the United States,’ it should respect the rule of law and provide much-needed clarity to ensure an ordinary person would understand what waters are regulated.

More background on the Trump administration’s efforts to repeal the 2015 WOTUS rule and restore prior regulatory language is available here.

Mike Howell, a senior adviser for executive branch relations with The Heritage Foundation, attended Wheeler’s announcement Thursday. He credited Trump for delivering on his pledge to provide the American people with regulatory relief.

“File this under promises kept,” Howell said. “The Trump administration today provided regulatory certainty to landowners across the country and undid one of the most egregious power grabs of the Obama administration.”

Not everyone was pleased with the Trump administration’s actions, however. The Natural Resources Defense Council, a New York City-based nonprofit environmental advocacy group, had issued a press release in anticipation of Thursday’s announcement.

Jon Devine, director of federal water policy at the council, said that the rule change would lead to environmental degradation.

“The Clean Water Rule represented solid science and smart public policy. Where it has been enforced, it has protected important waterways and wetlands, providing certainty to all stakeholders,” he said, adding:

The Trump administration’s wild-eyed attempts to reward polluters, however, knows no bounds, so it is repealing these important protections without regard for the law or sound science.

This unsubstantiated action is illegal and will certainly be challenged in court.

But David Fisher, president of the New York Farm Bureau, supports the rule change. He credits the Trump administration for striking a balance between environmental protection and economic opportunity.

“Farmers share the goal of protecting the nation’s water, but the 2015 Waters of the United States rule was unreasonable and unworkable,” he said at Thursday’s press event in Washington, adding:

It made protecting water quality and conservation efforts more difficult and created huge liabilities for farmers, especially when what waters would be regulated under the old rule could not be clearly defined.

This turned farming into a guessing game on which land use required federal permits and what did not.

New York Farm Bureau appreciates the EPA’s diligent effort to repeal and clarify the WOTUS rule to ensure a fair and reasonable substitute that protects our water and our ability to work and care for the land.