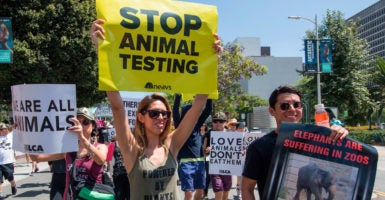 A memo signed by the EPA administrator calls for a 30 percent reduction by 2025 in the agency’s requests and funding of research studies using mammals. Pictured: Animal rights activists stage a march Aug. 10 in downtown Los Angeles. (Photo: Mark Ralston/AFP/Getty Images)

The Environmental Protection Agency’s move to curtail its use of animal testing, ending it within 15 years, is drawing praise from members of Congress and a broad cross-section of advocacy groups.

The Trump administration’s EPA this week set in motion an abrupt change in policy that requires the agency to seek alternative research methods.

A memo signed by EPA Administrator Andrew Wheeler calls for a 30 percent reduction in the agency’s requests and funding of research studies using mammals by 2025, according to a press release.

Wheeler’s memo Tuesday also calls for the elimination of all requests and funding for mammal studies by 2035.

Wheeler’s directive puts the onus on the Office of Chemical Safety and Pollution Prevention and the Office of Research and Development to produce “measurable impacts in the reduction of animal testing while ensuring protection of human health and the environment.”

People for the Ethical Treatment of Animals, the prominent nonprofit group promoting animal rights, is among advocacy groups expressing strong support for the EPA  initiative.

Clippinger has a doctorate in cellular and molecular biology and genetics.

“PETA will be helping regulatory agencies and companies switch to efficient and effective, non-animal testing approaches and working toward a day when all animal tests are only found in history books,” Clippinger said.

Rep. Matt Gaetz, R-Fla., said he sees an opportunity for other federal agencies to follow suit.

“I am thrilled to hear that the EPA is greatly reducing its reliance on animal tests, and promoting non-animal-based research at universities,” Gaetz said, adding:

Animal testing is often cruel and painful, with limited applicability to human health outcomes. Non-animal research is more accurate, more cost-effective, and more humane. I commend the EPA for their decision, and hope other departments and agencies will soon follow suit.

Wheeler also said Tuesday that his agency will provide $4.25 million in grants to five universities through the agency’s Science to Achieve Results Program.

The grant money will be used “to advance the research and development of alternative test methods for evaluating the safety of chemicals that will minimize, and hopefully eliminate, the need for animal testing,” Wheeler said.

With an eye toward taxpayer protection, the White Coat Waste Project also had words of praise for Wheeler and his agency.

Anthony Bellotti, president and founder of the taxpayer watchdog group, which counts 2 million supporters, said the EPA’s action represents “the most comprehensive and aggressive plan in U.S. history to cut wasteful animal testing.”

A “supermajority” of Americans in all political parties support the goal, Bellott said.

“The Trump administration has shown outstanding leadership to curb unnecessary taxpayer-funded animal tests and this development at the EPA is another remarkable win for animals, taxpayers, industry, and the environment,” he said.