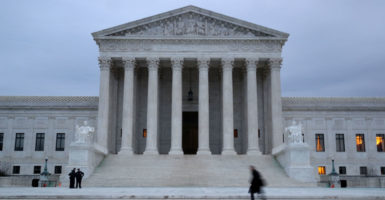 Democratic Rhode Island Sen. Sheldon Whitehouse defended a legal brief he filed with the Supreme Court which warned the justices that a ruling expanding gun rights could inflame the liberal push for court-packing.

In a new opinion column in The Washington Post, Whitehouse accused “conservative media” of distorting his position, under a headline that styled the high court “just another arm of the GOP.”

“The right-wing media eruption tried to deflect our plainly stated concerns by suggesting we want to change the number of justices on the court,” Whitehouse wrote. “That’s not what we’ve argued.”

“My own calls for judicial reform have been for transparency around the dark money behind judicial nominations and amicus briefs; for improved ethics reporting and a court code of ethics; and for justices to follow principles they espouse at confirmation hearings such as respect for precedent, judicial modesty, deference to duly passed laws of Congress, letting fact-finders find the facts, and calling balls and strikes apolitically,” the senator added.

Whitehouse filed the brief in a Second Amendment case now pending before the justices. Though the brief’s ostensible purpose was to urge the Court to dismiss the case for technical reasons, he broadly criticized the conservative justices of bending the rules to deliver victories for Republican political interests.

After noting that surveys show a growing number of Americans support major reforms of the judiciary, Whitehouse told the high court to “heal itself before the public demands it be ‘restructured in order to reduce the influence of politics.’”

The filing was widely condemned on the right and met a cool reception even among left-leaning court-watchers. Judicial Watch, the conservative oversight group, filed a complaint against Whitehouse with the Rhode Island Supreme Court. Senate Republicans sent a letter to the Supreme Court saying the number of justices would remained fixed at nine for as long as the GOP controls the upper chamber.

The senator reiterated his familiar criticisms in the WaPo column, describing a “big-donor takeover of the federal courts” through which unnamed forces funnel millions of dollars into conservative cause-lawyering groups and judicial confirmation battles to skew the judiciary toward Republican priorities. He accused right-leaning press like Fox News and the Wall Street Journal’s editorial board of engaging in a similarly orchestrated campaign to attack his brief.

“We saw precisely the howl of coordinated, multiple-mouthpiece misdirection you would expect to hear from big donors whose scheme to capture the Supreme Court for one team was suddenly exposed and is now at risk,” Whitehouse wrote.

The Supreme Court will begin hearing cases after its summer hiatus on Oct. 7.