12% of Judiciary Is Empty 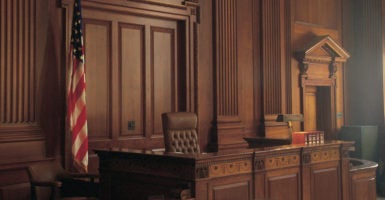 More than 55% of current vacancies are in this emergency category, compared with an average of 41% at this point under the previous several presidents. (Comstock/Getty Images)

The Senate will soon return from its August recess. What kind of judicial-confirmation progress should we expect during the rest of the 116th Congress?

Senate Democrats are sure to claim that the so-called “Thurmond Rule” requires the confirmation process to shut down early next year. Here’s a close look at this claim; it’s not a rule, and it did not originate with Sen. Strom Thurmond, R-S.C.

In fact, even calling it an informal tradition is too strong.

A more important consideration is also the most practical: the work that needs to be done filling judicial vacancies across the country. As if it needs to be said, the judiciary cannot do its work without judges.

Here’s where we stand today. The confirmation push in July means that, for the first time, judicial vacancies today are below their level when President Donald Trump took office.

Still, 12% of the judiciary is empty, compared with an average of 10% under the previous five presidents at this point. The judiciary remains in its longest period of triple-digit vacancies in nearly three decades.

The federal judiciary’s administrative office designates certain vacancies as “emergencies” because they have been open so long and have a negative effect on judicial caseloads.

More than 55% of current vacancies are in this emergency category, compared with an average of 41% at this point under the previous several presidents. Vacancies are 54% above the level Democrats said was a “crisis” under a Democratic president.

With the urgent need to fill vacancies in mind, the appointment process under previous presidents can provide markers for nominations, Judiciary Committee hearings, and Senate confirmations.

In the final 16 months of their first terms, for example, Presidents Bill Clinton to Barack Obama made nominations for an average of 76% of the vacancies that existed at this point. That would amount to nearly 80 additional nominations by the end of next year.

During this period, the Judiciary Committee held an average of 20 confirmation hearings for an average of 65 judicial nominees and continued hearings into the final months of each president’s first term.

Under Chairman Patrick Leahy, D-Vt., for example, the committee held a confirmation hearing on Dec. 12, 2012, more than a month after Obama’s reelection.

From the Reagan years through Obama’s first term, the Senate confirmed an average of 7% of the judiciary during a term’s final 16 months. Confirmations continued into October, November, and even December.

During the Obama administration, for example, there were 93 vacancies in September 2011, and the Senate confirmed 78 more judges, or 9% of the judiciary, over the next 16 months. With vacancies 10% higher today, that would translate into the Senate confirming at least 80 judges by the close of the 116th Congress.

During the entire first term of the previous five presidents, the Senate was forced to take a separate vote to end debate on a combined total of 14 of the 939 judges it confirmed. That’s about 1.5%. Democrats have already forced the Senate to take such a separate vote on 109 Trump nominees.

In 1997, with a Democrat in the White House, Leahy said that “confirming federal judges should not be a partisan issue.”

If that’s true, then we now have a sense of how the judicial-appointment process should operate for the rest of Trump’s term.