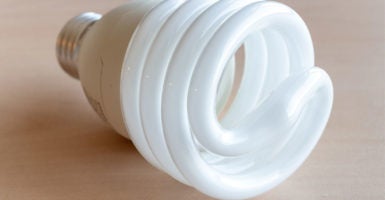 The Department of Energy announced this week that it’s withdrawing the Obama administration’s energy-rationing mandate for certain lightbulbs.

Opponents criticized the rule change, arguing that the move would be bad for consumers and the climate. The reality, however, is that families and businesses will be better off, and the change will have a negligible impact on the environment.

The Energy Department’s decision to withdraw energy-efficiency standards for candle-shaped, globe-shaped, three-way and reflector lightbulbs is a victory for consumer choice.

Whether it’s buying a lightbulb or a new car, families have different preferences and needs. They consider the various trade-offs in products and face different budget constraints.

When Washington forces energy-rationing mandates on consumers, the federal government takes those choices away or at the very least overrides their preferences.

Critics of the Department of Energy’s action argue that continuing to use energy-inefficient lights will cost households $100 annually in higher energy costs.

But here’s the good news: There’s no mandate forcing families or businesses to use inefficient lighting. Consumers can voluntarily replace inefficient bulbs with more efficient ones if they so choose.

The practices of being resourceful and saving money are intuitive, which means that the economy does not need mandates or rebate programs to nudge families into making decisions the government thinks are best for consumers.

In fact, many families and businesses are switching over to LED bulbs because of the cost savings.

“Because of their longer life, it is estimated that by the end of 2019, 80-84 percent of the general service lamp sockets will be occupied by LED and [compact fluorescent lamps], while the halogen incandescent bulb is estimated to be in 16-20 percent of these sockets,” the industry association says.

While proponents of energy-rationing regulations may attribute this transition to the Energy Department’s standard, consumers are also increasingly buying more efficient bulbs that aren’t covered by any standard.

Other appliances covered by the Energy Department’s mandates, such as refrigerators, also had energy-efficiency improvements before the standards took hold.

In a competitive market, manufacturers provide consumers with better products at lower costs, leading to dramatic improvements in energy efficiency. Thanks to entrepreneurs, technological advances, and consumer desires, Americans have become nearly 60 percent more energy efficient over the past half century.

Domestically and globally, energy intensity is in decline and will likely continue down that path.

Competition in lighting technology could very well phase out the traditional incandescent lightbulb, but the federal government shouldn’t be telling Americans how or when.

However, consumers should still have the option of paying smaller upfront costs for a bulb.  Or, if households prefer the lighting that an incandescent bulb gives off compared with an LED bulb or compact florescent lights, they should have the ability to do so.

Choosing to buy a bulb with a cheaper sticker price does not mean that families fail to recognize that they will pay a little extra for electricity. It does not mean that consumers, as Obama-era Energy Secretary Steven Chu said, “aren’t acting in a way that they should act.”

It simply gives them additional flexibility to manage a real-world family budget. Some households may value having more money in their pocket now, rather than value the energy savings later.

The decision may rest on buying a cheaper bulb and feeding their family versus buying a more expensive bulb and forgoing some other necessity the family needs.

The upfront costs of a more expensive lightbulb or appliance may not heavily affect a wealthy or middle-income family’s budget, but there are real-world implications of regulations that increase energy costs.

Empowering families with more choice and flexibility is a good thing.

Regardless of one’s stance on the need to address climate change, energy-efficiency regulations are an inefficient, ineffective way of doing so.

In fact, the Energy Department’s projected environmental benefits to Americans from reducing greenhouse-gas emissions total a measly 1 percent of all benefits projected from efficiency regulations.

The majority of calculated benefits are private benefits that a consumer derives from saving energy (which could be overestimated, depending on future energy prices and the reliability of the appliance).

In other words, not only do these regulations not meet a public need or create benefits to the general public health, but the Energy Department essentially is trying to protect people from themselves and make “better” decisions for them.

Furthermore, the abated warming and sea-level rise from reduced greenhouse-gas emissions because of energy-efficiency mandates would be practically too small to even measure.  The changes would be indistinguishable from natural climate variability.

Just look at much of the content from CNN’s seven-hour “climate crisis” town hall on Wednesday night. Much of the discussion centered on what type of energy you should use, what kind of car you should drive, which appliances you should buy, and how you should eat less meat and use fewer plastic straws.

Voluntarily, all of these options are fine. When forced upon the public by the federal government, these regulations drive prices higher, impede innovation, and restrict consumer freedom—all for an insignificant impact on climate.