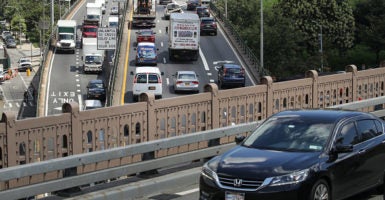 A coalition of conservatives is supporting the Trump administration’s plan to roll back Obama-era fuel efficiency standards, which it says could reduce the cost of cars and light trucks for consumers.

The support came a day after the U.S. Chamber of Commerce released a report with a letter urging the Trump administration not to revise Corporate Average Fuel Economy standards, and pushing for a compromise with the state of California, which has much stricter standards.

For now, the administration seems to be focused on revising the CAFE standards, which also regulate tailpipe emissions for cars and light trucks.

“This move is right in line with President Trump’s deregulation efforts and will benefit all Americans,” the official said.

The statement issued by the coalition of conservative leaders, known as the Conservative Action Project, strongly backed President Donald Trump’s proposed change in the standards. It says:

Current CAFE standards are both expensive and dangerous. The National Highway Traffic Safety Administration estimates that domestic passenger vehicle manufacturers paid more than $77 million for noncompliance with President Obama’s CAFE standards—penalties that will get worse unless these unrealistic standards are changed.

Those signing on to the statement include former Reagan administration Attorney General Edwin Meese, Heritage Action for America Vice President Jessica Anderson, and about 80 other leaders from conservative groups such as the Club for Growth, Family Research Council, FreedomWorks, and the Media Research Center.

“The Trump administration’s approach is in direct contrast to efforts by the state of California, which is attempting to impose its unreasonable and irresponsible approach nationwide,” they say in the statement. “As Louisiana Attorney General Jeff Landry said in recent congressional testimony, ‘CAFE does not stand for California Assumes Federal Empowerment.’”

In a letter to Transportation Secretary Elaine Chao and Environmental Protection Agency Administrator Andrew Wheeler, however, the U.S. Chamber of Commerce contends that a revision of federal standards that clashes with California’s standards could spell trouble for the larger economy.

The ramifications of such a scenario include exacerbation of existing market uncertainties, delayed investment in and realization of safety and emissions improvements, increased consumer costs, and job losses across the auto sector, its extensive supply chain, and associated industries.

There is a growing consensus that the current standards, which require steep annual mileage improvements through model year 2025, are not reasonably achievable and must be significantly revised. It is also clear that the administration’s proposal to hold standards flat beginning in model year 2020 is insufficient—continued progress on fuel economy and emissions reductions can be achieved without undue harm to the economy, and predictable year-over-year efficiency improvements are key to enabling the U.S. to maintain environmental and manufacturing leadership.