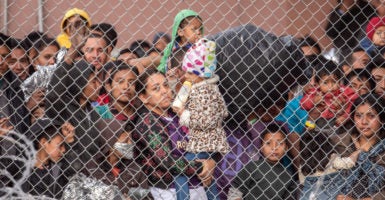 Migrants gather inside the fence of a makeshift detention center in El Paso, Texas, March 27, 2019. (Photo: Sergio Flores for The Washington Post via Getty Images)

A coalition of about 20 Democrat-led states are suing the Trump administration over its plan to detain migrant families for the entire duration of their court proceedings.

Twenty Democratic attorneys general filed a lawsuit in the U.S. District Court for the Central District of California on Monday to stop the Department of Homeland Security from implementing a rule change to the Flores Settlement Agreement, which has required immigration authorities to detain migrant family units for no longer than 20 days.

California and Massachusetts are leading the charge against the rule change.

“This new Trump rule callously puts at risk the safety and well-being of children. It undermines a decades-old agreement reached in court by the federal government to prevent the unlawful detention of immigrant children,” California Attorney General Xavier Becerra said in a statement released Monday. “We’re taking the Trump Administration to court to protect children from the irreparable harm caused by unlawful and unnecessary detention.”

Acting Homeland Security Secretary Kevin McAleenan on Wednesday announced the rollout of licensing regimes for family residential centers. Doing so would prevent the department from releasing migrant family units before their asylum cases are adjudicated.

The battle over the Flores Settlement Agreement dates back to the Clinton administration, and it’s cited by government officials as the biggest instigator of the current immigration crisis.

However, this rule was upended in a 2015 court ruling that interpreted it to also apply to accompanied children—otherwise known as family units. The decision created havoc for Homeland Security because states do not have licensing regimes for family detention centers. Under Flores, unlicensed facilities have to release migrant children in 20 days.

The Trump administration is bypassing this roadblock by creating an Immigration and Customs Enforcement licensing standard to license these family residential centers, allowing family units to remain in detention for the duration of their court process.

Democrats immediately attacked the plan, claiming it to be a bid to detain children for long periods of time. Like many other aspects of President Donald Trump’s immigration agenda, they plan to torpedo the Flores settlement change in court. Acting Customs and Border Protection Commissioner Mark Morgan pushed back on that narrative.

“Not only does it meet the Flores Settlement Agreement parameters, it actually exceeds them for the care that we will provide in these residential centers for these children,” Morgan said Tuesday on “Fox & Friends,” speaking about the change. “In addition to that, it actually will make sure that the families are held together.”

“And here’s a really quick false narrow that needs to be addressed. This is not about indefinite detention. If anybody says that, that’s an absolute lie. We are wanting to hold them together as a family in a good, safe environment just during the immigration proceedings, which history shows us takes between 40 and 60 days.”