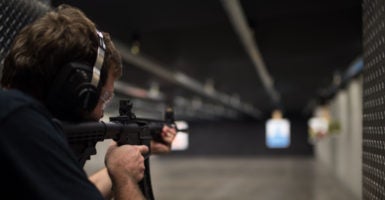 The proposed gun liability insurance reportedly would cover accidental discharge of a firearm as well as the acts of those who steal or borrow one. (Photo: Matthew Palmer/Getty Images)

Gun owners in California’s third-largest city are slamming a proposal that would force them to buy liability insurance or be penalized with a fee.

“We believe that anything that government does as a prerequisite to exercising an enumerated constitutional right is unconstitutional,” Sam Paredes, executive director of Gun Owners of California, told The Daily Signal in a phone interview about the measure announced last week by San Jose Mayor Sam Liccardo.

The proposal, a response to the Gilroy Garlic Festival shooting Aug. 6 that killed two children and an adult and injured 12 others, would mandate that gun owners in San Jose have private liability insurance, Axios reported.

If private liability insurance isn’t available, or if gun owners aren’t able to buy coverage, they may be subjected to a fee that would fund police and emergency responses to gun-related crime, it reported.

Those paid fees would have to be kept private, potentially through blockchain, a peer-to-peer currency network, in keeping with California law prohibiting gun registries.

Liccardo, a Democrat, says the proposal is based on incentivizing “safe behavior” and the “price signals in the insurance markets.” It would cover accidental discharge of a firearm and “intentional acts” of those who illegally take or borrow one, Axios reported.

Paredes, executive director of Gun Owners of California since 1998, said the measure is meant to undermine Second Amendment rights.

“We think that this is clearly an attack to make life more miserable and difficult for law-abiding gun owners because the liability insurance cannot cover a criminal act,” he said, “whether it’s done by the purchaser of the firearm or in the event that somebody else uses that purchaser’s firearm to commit some sort of a criminal act.”

Paredes said government would see more success in addressing and ending gun-related crime if it focused less on banning or further restricting guns as the only solution.

“As long as government—whether it’s on a local level, the state level, or the federal government—continue to focus on gun control in order to curb gun violence, they’re going to miss it,” Paredes said.

Instead, he said, the emphasis should be on punishing perpetrators with “stiffer penalties” to discourage others from committing gun crimes.

Rick Travis, executive director of the California Rifle & Pistol Association, said in a statement provided to The Daily Signal that California’s track record with gun control laws does not bode well for this latest proposal in San Jose.

“California already has more than 800 gun laws, none of which are adhered to by criminals,” Travis said.

This demand would just be another example of punishing law-abiding citizens for the crimes of others,” he said. “Furthermore, the mayor compared this insurance to auto insurance, which is an inaccurate comparison. Driving a car is not a right defined in the Constitution; however, owning a firearm to protect your family is.”

If the San Jose City Council approves the measure, the city would become the first in the U.S. to compel gun owners to purchase liability insurance.