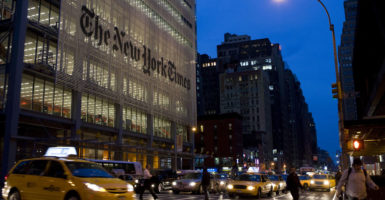 “I have deleted tweets from a decade ago that are offensive. I am deeply sorry,” a New York Times editor, Tom Wright-Piersanti, says. Pictured: The exterior of the Times' headquarters in New York City in May 2008. (Photo: Jonathan Torgovnik/Getty Images)

A Times spokesperson told Fox News that the editor, Tom Wright-Piersanti, apologized to leadership for “his recent serious lapses in judgment.”

“I have deleted tweets from a decade ago that are offensive. I am deeply sorry,” Wright-Piersanti wrote on Twitter, according to The Wrap. Wright-Piersanti’s tweets have since become protected.

As the @NYT keeps bashing the President, their own political editor Tom Wright-Piersanti has YEARS of antisemitic and racist comments on his Twitter page.

So bold, he even had a New Years resolution to be less antisemitic as he mocked Jews #NYTAntiSemite https://t.co/RI5RHnoOL9

“As a consequence of his actions, he has been demoted and will no longer be overseeing the team that covers Congress or be active on social media,” the spokesperson said. “We don’t typically discuss personnel matters, but we’re doing so in this instance with Jonathan’s knowledge.”

In now-deleted tweets from 2008 and 2010, according to Fox, Wright-Piersanti wrote:

“I was going to say ‘Crappy Jew Year,’ but one of my resolutions is to be less anti-Semitic. So … HAPPY Jew Year. You Jews.”

“Want to see dozens of Indian girls grind all over each other? Go to the Golden Rail Pub in New Brunswick, NJ.”

“Two high-voiced Indian guys keep calling each other ‘dawg’ and they aren’t doing it as a joke. F**k THAT s**t.”

“There are four Indian guys with mohawks in this one class, and each one is a douche in his own awful way. I hate mohawk Indians.”

“I don’t hate Mohawk Indians, though. I love those guys. I just hate Indians with mohawks. Different Indians, different mohawks.”

In another tweet, Wright-Piersanti posted an image of a car with a giant, lighted menorah on top of it and wrote, “Who called the Jew-police?”

Wright-Piersanti joined the Times in 2014, but before he was hired, he tweeted about the publication several times, according to the New York Post.

“What the NYTimes does is take your story, spice it up with a dash of *douche zest* and then a million people read it,” he wrote.

Wright-Piersanti later tweeted about a Times reporter who was sent to Montclair, New Jersey, for a story, writing, “Maybe NYT was right to send a douche,” adding a line from a Times article that read: “‘Montclair likes to think of itself as having more of a mix of races and classes than other suburbs.’”

Reps. Mo Brooks, R-Ala., and Lee Zeldin, R-N.Y., called on the Times to punish Wright-Piersanti for his past tweets.

“Fire this dangerous bigot,” Brooks wrote on Twitter, along with a quote from Wright-Piersanti.

New York Times senior staff editor Tom Wright-Piersanti posts: “I was going to say ‘Crappy Jew Year,’ but one of my resolutions is to be less anti-Semitic. So….HAPPY Jew Year. You Jews.”

Zeldin wrote: “[The New York Times] has a political editor [Tom Wright-Piersanti] who literally describes himself on Twitter as anti-Semitic & has slammed Jews, Native American Indians & others. This isn’t an intern. It’s an editor. Someone should walkover [sic] to his desk, tell him to pack up & escort him out.”

.@nytimes has a political editor @tomwp who literally describes himself on Twitter as anti-Semitic & has slammed Jews, Native American Indians & others. This isn’t an intern. It’s an editor. Someone should walkover to his desk, tell him to pack up & escort him out. pic.twitter.com/OIQaiGNDgF

The Times came under fire in August 2018 for hiring an editor who also had a history of questionable tweets, such as: “Dumb*ss f**king white people marking up the internet with their opinions like dogs pissing on fire hydrants.”

The Times defended its decision to hire Sarah Jeong after her tweets resurfaced, praising her “exceptional work” and adding: “Her journalism and the fact that she is a young Asian woman have made her a frequent subject of online harassment. For a period of time she responded to that harassment by imitating the rhetoric of her harassers.”