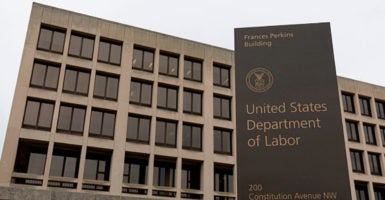 The Labor Department on Wednesday announced a new rule to grant the “broadest protection permitted by law” to religious organizations contracting with the federal government.

The proposed rule to clarify civil rights protections for religious groups will be added to the Federal Register on Thursday, but is now open to public comment.

“Today’s proposed rule helps to ensure the civil rights of religious employers are protected,” acting Labor Secretary Patrick Pizzella said in a statement. “As people of faith with deeply held religious beliefs are making decisions on whether to participate in federal contracting, they deserve clear understanding of their obligations and protections under the law.”

Religious freedom has been an ongoing concern in recent years, as liberal groups have brought litigation against faith-based nonprofits and privately owned companies to try to compel them to take actions contrary to their religious beliefs. In most cases, those lawsuits have failed in the Supreme Court.

However, several left-leaning organizations attacked the proposal, charging it would allow discrimination against the LGBT community.

“Once again, the Trump administration is shamefully working to license taxpayer-funded discrimination in the name of religion,” Ian Thompson, senior legislative counsel to the American Civil Liberties Union, said in a statement. “Nearly one-quarter of the employees in the U.S. work for an employer that has a contract with the federal government. We will work to stop this rule that seeks to undermine our civil rights protections and encourages discrimination in the workplace.”

The Labor Department cited several executive orders by President Donald Trump that extended the broadest protection for religious liberty permitted under the law.

“OFCCP is consistently looking for ways to bring clarity and certainty to federal contractors, and this proposal falls squarely within that effort,” the office’s director, Craig Leen, said in a statement. “The rulemaking process allows the public opportunity to comment on the proposal and impact any potential final rule.”

The new proposed rule is much needed to clarify existing policy prohibiting employment discrimination by federal contractors, said Emilie Kao, director of the DeVos Center for Religion and Civil Society at The Heritage Foundation.

“It responded to concerns from religious organizations who were reluctant to participate as federal contractors because of uncertainty regarding the scope of the religious exemption contained” in the civil rights policy, Kao told The Daily Signal, adding:

It is consistent with Supreme Court rulings in Trinity Lutheran, Masterpiece Cakeshop, and Hobby Lobby, which established that religious organizations do not have to abandon their religious beliefs or identity to participate in public-private partnerships.

The rule benefits not only religious employers, but all those whom they serve.