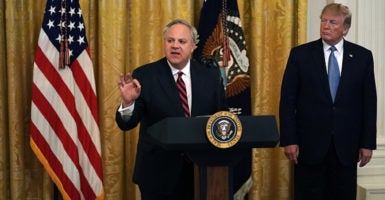 The Trump administration is applying new regulations to protect endangered species, rolling back some requirements to ground the policy in scientific and economic factors, the Interior Department announced Monday.

The regulations, based on the 1973 Endangered Species Act, will “increase transparency and effectiveness and bring the administration of the Act into the 21st century,” the agency said.

The rules won’t extend the same protections to threatened species as are applied to those already on the endangered list. Nor will they look as far into the future to project what species face extinction.

The changes likely will draw litigation from liberal and environmental groups.

“The best way to uphold the Endangered Species Act is to do everything we can to ensure it remains effective in achieving its ultimate goal—recovery of our rarest species,” Interior Secretary David Bernhardt said in a prepared statement.

“The Act’s effectiveness rests on clear, consistent and efficient implementation. An effectively administered Act ensures more resources can go where they will do the most good: on-the-ground conservation,” Bernhardt, who took office in April, said.

“For over 45 years, the Endangered Species Act has failed to effectively recover species, with only about 3% of listed species getting delisted due to recovery efforts, largely due to how the federal government has implemented the law,” Bakst said in a written statement, adding:

While more needs to be done to improve species conservation, the federal government is on the right track by recognizing past mistakes implementing the [Endangered Species Act] and taking steps to correct them. The Trump administration should be commended for these common-sense reforms.

Critics of the administration reportedly say the move stops the Interior Department from considering how climate change will harm a vulnerable species, while environmentalists claim this significantly weakens protections.

The Endangered Species Act directs that determinations to add or remove a species from the lists of threatened or endangered species be based “solely on the basis of the best scientific and commercial information regarding a species’ status.”

Under the new regulations, these will remain the only criteria on which listing determinations are based, according to the Interior Department.

However, the revisions clarify that standards for de-listing and reclassifying a species ought to consider the same five statutory factors used in listing the species in the first place.

The Interior Department announcement notes that “in some cases, designation of critical habitat is not prudent.”

The agency said the new regulations reinstate a requirement that areas where threatened or endangered species are present at the time of listing be evaluated before unoccupied areas.

The rules also impose a higher standard for unoccupied areas to be designated as critical habitat. An unoccupied area must at the time of designation contain one or more of the physical or biological features essential to the species’ conservation.