How Charlottesville ‘Resistance’ and Violence Felled a Rising Political Star 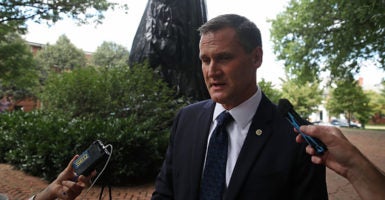 That’s where the mayor declared to a cheering crowd that Charlottesville was a “capital of the resistance.” Signer’s stand that Jan. 31 was in response to the Trump administration’s restrictions on travel from terrorism-prone countries.

“These folks couldn’t run a two-car parade much less policies affecting the rights and lives of millions of people, and that is why I am here today to declare that Charlottesville, the historical home of Thomas Jefferson, is a capital of the resistance,” Signer said.

During the rally in January 2017, Signer said: “The word ‘resist’ has a special meaning—it comes from the Latin word [for] ‘to stand.’ And that’s what you all are doing today: You’re standing for American values.”

Charlottesville voters elected Signer to the City Council in November 2015, and fellow council members unanimously elected him as mayor the following January.

Signer seemed to have a promising political future as the figurehead face of government in one of the state’s most iconic cities. The author of two books, Signer also wrote for multiple national publications.

Before Trump’s inauguration, Signer penned a Time magazine op-ed advocating an Electoral College to stop him.

But within months of his resistance rally, much of Charlottesville had turned against the mayor and blamed him for the violence during the “Unite the Right” gathering of white nationalists the following Aug. 12.

The city seemed ill-prepared for trouble, and police were faulted for not keeping protesters and counterprotesters apart. Already chaotic City Council meetings became more out of control, as some residents began shouting for Signer to resign.

By early 2018, the council voted to make newly elected Nikuyah Walker the mayor. Although Signer remains on the council, he didn’t run for another term.

Some critics in Charlottesville claim a once promising political future lies in ruins.

Signer has defended himself and the city, writing a commentary published Saturday in the Richmond Times-Dispatch challenging the claim in former Virginia Gov. Terry McAuliffe’s book “Beyond Charlottesville: Taking a Stand Against White Nationalism” that the city government was entirely to blame for the rally-turned-riot.

“I barely noticed it,” Signer tells The Daily Signal, saying the recall movement wasn’t a factor in his deciding not to run again.

Others in the city assert a connection between the resistance rally and the chaos that followed in August.

“In 1860, we elected a president with less than 40% of the popular vote. Charlottesville resisted, and it didn’t turn out very well,” Charlottesville lawyer Charles Weber says in an interview, referring to Abraham Lincoln and the Civil War.

“Resistance calls up something more serious than loyal opposition,” Weber says, who represents residents who sued to block removal of Confederate statues. “It really does say, ‘This is an illegitimate government and we are going to resist it.’”

>>> Related: 2 Years After the Riot, Charlottesville Struggles to Move Forward

The violence that gripped part of the city wasn’t all Signer’s fault, but he did set himself up for blame by making a political play, says conservative talk radio host Rob Schilling, a former City Council member.

“He stepped out and tried to put himself in a national spotlight, declaring this the capital of the resistance and riding high when 900 people showed up to hear him. Then all of a sudden, now he’s crashing big time,” Schilling tells The Daily Signal.

Signer got more than he bargained for “in calling all this attention to himself,” Schilling says.

“That was the kickoff. It was like, ‘We are going to resist you.’ He didn’t even know what he was resisting, but it is what I would call a raw grab for political power,” Schilling says.

Signer is the author of a 2009 book called “Demagogue: The Fight to Save Democracy from Its Worst Enemies” in which he writes that demagogues meet four criteria: They “posture as a mirror of the masses,” “trigger great waves of emotion,” “use that emotion for political benefit,” and “threaten or break established rules of governance.”

“In Charlottesville, the political dreams of Michael Signer were ended,” Schilling says. “It was a guy looking to feather his own nest. He was going to build a political base that way. You cannot control the mob. When you start calling up a mob for political power, it turns on you.”

Far from a kickoff to more chaos, Signer says, his resistance rally was mainstream.

He notes that attendees included Gold Star father Khizr Khan, who spoke at the 2016 Democratic National Convention; a University of Virginia administrator; Christian and Jewish faith leaders; and Pam Northam, wife of then-Lt. Gov. Ralph Northam, who is now governor.

Signer cites court documents saying Jason Kessler, a Charlottesville resident who organized racist rallies such as the “Unite the Right” event, specified the renaming of Lee Park to Emancipation Park as the “genesis” of his interest in the city.

“This would seem to undermine any attempt to blame the resistance rally for a series of events including [white supremacist] Richard Spencer’s May torch rally at Lee Park, the KKK’s July event, and the August ‘Unite the Right’ event,” Signer says, adding:

Far smarter people than me have observed that arguing causation with historical events is a fool’s errand that usually involves more politics than it resolves. After all, at the time of the [January 2017] rally, mayors around the country in cities like Los Angeles, New York, and Boston were declaring their municipalities ‘sanctuary cities’ and promising to defy federal law.

With regard to the removal of Confederate statues that prompted the marches, Signer moved cautiously well after his resistance speech.

When then-Vice Mayor Wes Belamy called for the statues to be removed, Signer pushed for a Blue Ribbon Commission on Race, Memorials and Public Spaces to review options.

Afterward, Signer was on the losing end of two 3-2 council votes.

The first was to relocate the Lee and Jackson statues to another park, one of the commission’s options. The other was to sell the statues, which the commission didn’t include as an option.

In a May 2017 op-ed in The Washington Post, Signer explained his vote.

“We shouldn’t honor the dishonorable Confederate cause, but we shouldn’t try to erase it, either,” Signer wrote, adding:

I reject the false dichotomy that you must be either for or against the statue. I’ve advocated for a third path, one that has earned unanimous support from our council: Reimagining our parks by building new monuments as a powerful counter-narrative to their Jim Crow-era celebration of the Confederacy—neither forgetting the past nor accepting its grasp on our present and future.

Signer’s view changed after the white nationalist violence two years ago, as he told The Guardian the statues must go.

“It became very clear to me that the historical meaning of this statue has been inalterably changed,” Signer is quoted as telling the U.K. newspaper. “It’s changing every day in part because we’re getting new threats on a daily basis from terrorists who see it as a lightning rod and want to come back here. … And people are frightened of what the statue will do to us. I think that it has become a public safety threat and that is its meaning now.”

Signer voted along with council members to cover the statues with black tarps pending the outcome of litigation that prevented their removal. A state court later ordered the tarps removed.

Signer and the council commissioned an independent report that found fault with the council, city staff, and state officials for being ill-prepared for the riot.

Little more than a year ago, Signer was in the majority as the council voted 4-1 to again rename the park that is home to the Lee statue, this time to Market Street Park instead of Emancipation Park. In the same action, the council renamed Justice Park, site of the Jackson statue and formerly Jackson Park, as Court Square Park.

Signer stressed in his interview with The Daily Signal that he didn’t have executive authority as mayor. The city of about 48,000 has a city manager form of government, in which elected officials hire a professional to administer municipal affairs.

“Throughout, I thought it was really important for the public through the process to understand the form of government we have,” Signer says. “This is the first time many people understood what a city manager form of government is. A lot of cities do a better job of explaining what that is, which goes back 100 years.”

Weber, the lawyer defending the Confederate statues, has advocated changing Charlottesville’s form of government to a strong-mayor system, in which an elected executive is accountable to voters.

Acknowledging that Signer was just one vote on the five-member City Council, Weber says that although other communities had disputes over Confederate statues, Charlottesville became “ground zero” in part because of Signer’s resistance rally.

“Two things made it ground zero. The first one is when our mayor stood up after Donald Trump’s election and said we will be the center of the resistance,” Weber says.

The other factor, he says, is that Virginia is among states with a law protecting all war memorials, including Confederate statues. But Charlottesville’s council nevertheless voted to remove the two statues.

“You’ve got the mayor saying we are the center of the resistance. Why else would somebody like Richard Spencer and his merry band of neo-Nazis ever decide to come to Charlottesville?” Weber says.

“I don’t think it would have happened without those two events. He [Signer] put a target on our back, and the council did something foolish in violation of the law.”