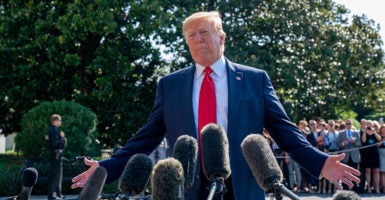 President Donald Trump says he anticipates his strongest supporters will back stiffer background checks for buying a gun, and that the National Rifle Association either will come on board or stay neutral.

“I think my base relies very much on common sense, and they rely on me in terms of telling them what’s happening,” Trump told reporters Friday on the South Lawn of the White House before boarding Marine One.

Trump and some members of Congress are looking to take action after the two shootings last weekend within 13 hours of each other that left 31 dead in El Paso, Texas and Dayton, Ohio. Dozens more were wounded or injured.

In an address Monday from the White House, Trump said he supported tougher background checks during gun purchases as well as extreme-risk protection orders that allow firearms to be confiscated in specific cases, also called red flag laws.

The NRA issued a statement Thursday casting skepticism on red flag laws, asserting that “there needs to be real evidence of danger—and we cannot sacrifice anyone’s constitutional rights without due process.”

The gun rights group added: “It is not enough anymore to simply say that ‘we need more background checks.’ Considering both suspects in El Paso and Dayton passed them, that is rhetoric for billionaire activists and campaign rallies—not a call for constructive progress.”

Trump said Friday that he had a good conversation with NRA Chief Executive Wayne LaPierre and called NRA members patriots. He said he has a “great relationship” with the organization.

“In the end, Wayne and the NRA will either be there or may be a little bit more neutral. That would be OK, too,” Trump told reporters.

The president asserted that he is moving many Republicans in Congress that traditionally have opposed more gun control measures. Senate Majority Leader Mitch McConnell, R-Ky., is “totally on board,” he said.

He said by the time he called lawmakers back, the August recess would be almost over anyway.

“There’s been no president that feels more strongly about the Second Amendment than I do,” Trump said. “However, we need meaningful background checks, so that sick people don’t get guns.”