Problematic Women: Breaking Through the Noise After the Massacres 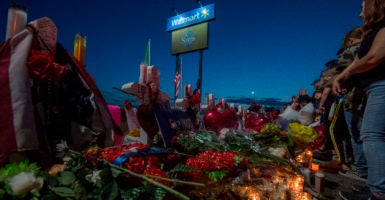 Mourners pay their respects Tuesday at a makeshift memorial for victims of the shooting Saturday at a Walmart in El Paso, Texas, that left 22 dead and 24 injured or wounded. (Photo: Mark Ralston/AFP/Getty Images)

In this week’s edition of “Problematic Women,” Amy Swearer, senior legal policy analyst at The Heritage Foundation, joins us to discuss the tragic mass shootings in El Paso, Texas, and Dayton, Ohio. First, we discuss politicians’ and the media’s eagerness to blame everything from video games to Fox News for the shootings. We then talk about the liberal outrage mob that broke out when The New York Times correctly reported that President Donald Trump denounced hatred and white supremacy. Finally, Swearer breaks down some commonsense solutions to curb gun violence, while still respecting the Constitution.

Also in this week’s “Problematic Women,” we discuss:

—Should you post photos of your kids online? A new Wall Street Journal video lists three reasons why you probably shouldn’t.

—Banana Republic is now selling hijabs, but some Muslim women are questioning its marketing strategy.

—We crown Saudi Arabian women as the Problematic Women of the Week, as they celebrate their newfound freedom to drive cars without the consent of a male guardian.