Trump, Baltimore, and the Diminishing Potency of the ‘Race Card’ 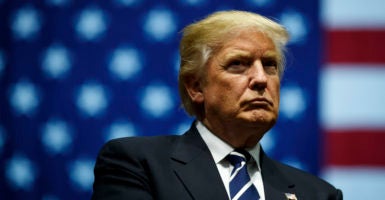 The editorial board of The Baltimore Sun responded to President Donald Trump's tweets about the city in a scathing editorial comparing him to vermin. Pictured: President-elect Donald Trump at a rally on Dec. 9, 2016, in Grand Rapids, Michigan. (Photo: Drew Angerer/Getty Images)

President Donald Trump’s harsh, angry tweets about the social conditions and hygienic disaster in Baltimore (directed at Rep. Elijah Cummings, D-Md., and others) were undoubtedly in bad taste.

It is understandable, therefore, that The Baltimore Sun editorial board felt compelled to respond in kind, which it did in a scathing editorial that compared the president to vermin.

But the piece went too far when it then blamed the president for Baltimore’s problems with the rationale that “they are as much his responsibility as anyone’s, perhaps more because he holds the most powerful office in the land.”

This is a specious argument at best. Perhaps the office of the president, over the successive administrations that have coincided with a declining and rotting city, could have helped in some way. But Baltimore’s problems predate the Trump presidency by decades and have been exacerbated not so much by presidential inaction but by Baltimore’s own failed leadership.

No one likes to have people talk ill of their neighborhood—even if it is one filled with as many seemingly intractable problems as Baltimore faces. But the sad reality is The Baltimore Sun, its editors, and many city officials, as well as Cummings, sat idly by while the inner city crumbled.

Their strategy for improving the situation? Hope—and as it turns out, not an inconsiderable amount of corruption.

Baltimore has true legacy problems. But blaming others is not good government. The newspaper’s editorial team needs a refresher course in Civics 101.

In the president’s defense, he has implemented several measures that could help blighted communities such as Baltimore regain their luster. Foremost among them is the president’s initiative for opportunity zones, which facilitate private investment specifically targeted toward bringing industry and creating jobs in underserved communities.

Instead of critiquing Trump, Baltimore’s leadership could take him up on his offer and propose creative solutions to attract private investment that would give the city jobs, tax revenue, and badly needed infrastructure improvements.

A true assessment of the legacy problems facing Baltimore has to start with a hard look at what folks are doing wrong.

Why is it that Baltimore’s most elite police unit—the gun trace task force—was apparently able to operate like an armed drug gang for years without oversight?

Why is it that Baltimore’s schools are among the worst in the country?

Why does the murder rate in Baltimore continue to run rampant?

There are a lot of things that could be accomplished with a fair bit of introspection and perspective rather than finger-pointing.

In fact, Cummings should be at the front of the line in pushing for a federal blue-ribbon review of the city and his entire district. That’s the change we all hope for and desperately need.

Sadly, one of the reasons people hate politics is that truth is rarely a politician’s objective; election and power are. Somehow, amid all the grandstanding, real solutions usually get pushed by the wayside.

Calling Trump racist, trash, or any harsh name you can muster doesn’t excuse Baltimore’s elected officials of their failed leadership, which has allowed worsening crime, making it one of the most dangerous cities in America, with one of the worst education systems. Large sections of what could be a beautiful town are overrun by vacancy and decay.

Playing the race card is losing its luster. The entire city has been run by largely black leadership for decades while problems have festered.

Trump did not preside over the destruction of Baltimore and the failure of its residents. If he had, could you even imagine the righteous indignation and shrill screams about the deplorable conditions in Baltimore you’d hear from the left?

But because the city is run by liberal Democrats, the offense to black residents of having to live amid such a mess almost goes unmentioned.

What’s more racist: the president’s harsh remarks or the decades of liberal leadership’s harsh actions (and inaction)? You can’t play the race card to excuse what the people of Baltimore witness daily.