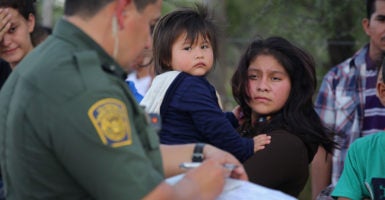 Immigration and Customs Enforcement has been forced to let go more than 200,000 members of migrant families since December. Pictured: Border Patrol agents process immigrants from Central America while taking them into custody Aug. 17, 2016, near Roma, Texas. (Photo: John Moore/Getty Images)

U.S. Immigration and Customs Enforcement, tasked with carrying out removal orders for illegal aliens living in the U.S., has been forced to let go a total of 108,400 migrants over the past eight months, an agency spokesperson confirmed to The Daily Caller News Foundation. The Washington Examiner first reported the figures.

Of the 218,400 members of family units who were released, around 82,300 were dropped off in San Antonio, Texas, and approximately 74,700 were let go in El Paso, Texas, according to information the agency provided.

Some 41,000 aliens held in Phoenix have been permitted to be released, and San Diego let loose another 20,400.

The migrants likely were given a Notice to Appear in an immigration court at a later date, but it’s not certain how many will show up on their court date.

Border Patrol agents apprehended or encountered a total of 780,633 aliens since Oct. 1, the beginning of fiscal year 2019—and those figures do not include July’s apprehensions. Of the encounters, nearly 428,000 were members of a family unit.

A 2015 court ruling regarding the so-called Flores settlement prohibits Immigration and Customs Enforcement from detaining a child for more than 20 days, even if that child arrives with a parent or other family members. The agency has no choice but to release undocumented family unit members by the thousands because of the high volume of illegal aliens arriving at the southern border.

Immigration courts are so backed up, in fact, that judges typically are not able to hear new cases for two to five years.

Leaders of the Department of Homeland Security, which includes ICE, have repeatedly appeared before congressional hearings and asked lawmakers to pass a fix to Flores—arguing that illegal aliens know full well how to exploit the law.

“For the first time in Border Patrol history, nearly half of the adults we apprehended in April brought children. They have received the message loud and clear: Bring a child, you will be released,” Border Patrol chief Carla Provost said before a Senate subcommittee in May. “My greatest concern is that we will no longer be able to deliver consequences and we will lose control of the border.”

Content created by The Daily Caller News Foundation is available without charge to any eligible news publisher that can provide a large audience. For licensing opportunities for this original content, email [email protected]ion.org.