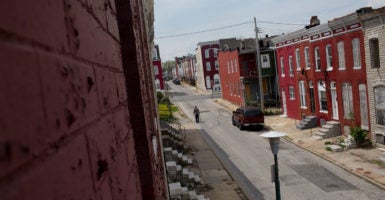 Baltimore’s homicide rate outpaced all major cities in 2017. In 2018, the city had the highest overall crime rate out of the 30 largest cities in America. (Photo: Andrew Lichtenstein/Corbis via Getty Images)

You may not like the messenger, but embedded in the recent political dust-up about the crime, poverty, and despair in Baltimore were some undeniable truths.

If nothing else comes out of this latest debate, the bright light is now shining on a very inconvenient reality: Liberal policies have failed the people of Baltimore and inner cities everywhere.

As the daughter of a former welfare recipient who spent my early years growing up in government housing, I know the truth of that statement more than most.

For decades, politicians have repeatedly promised urban communities good jobs, good schools, and safe neighborhoods. Instead, they have delivered policies that actually increase crime, degrade educational standards, and make it harder to get work.

The debate this incident has sparked sadly takes me back to a few years ago, when I was at my niece Ashley’s funeral service. Ashley was a product of the inner city. She was 32 years old when she died of a drug overdose.

She started out as a beautiful, strong, and intelligent young girl who had so much promise. But like so many others who grew up in that environment, she became disengaged from school, started hanging out with the wrong crowd, and began using drugs.

As I sat in the pew that day, I thought: Why does this keep happening in my community and what is it going to take to finally stop it?

Anger began to overtake my sadness, though, when I looked over and saw the precious teenage daughter Ashley had left behind. How were we going to protect her from the same fate?

I wanted to stand up and shout to everyone in the church: “How much more are we going to take? How many more are we going to lose? How did the hopes and dreams of our forbearers give way to so much despair? How can we let innocent children grow up in poverty, be exposed to drugs, and see the violence done against their neighbors—and against themselves? Are we mad enough yet that we’re finally willing to do things differently?”

And so I ask the same question today for those trapped in the inner cities of Baltimore and Richmond and Detroit and everywhere else: Are we as a society mad enough yet that we’re finally willing to do things differently?

In Baltimore, the poverty rate of 22% is nearly double the national rate. Baltimore’s schools rank among the lowest-performing in the entire state of Maryland.

Crime is allowed to fester. When police and prosecutors don’t pursue and punish smaller crimes, criminals remain on the streets and graduate to more serious crimes until things spiral out of control.

During the riots of 2015, Baltimore’s mayor instructed police to give protesters “who wished to destroy” the necessary “space to do that.”

Baltimore’s homicide rate outpaced all major cities in 2017. Last year, the city had the highest overall crime rate of the 30 largest cities in America.

Even Bernie Sanders called Baltimore a Third World country when he visited in 2015.

Conservatives have been saying for years that our inner cities are laboratories where the far-left experiments with policies based on feelings rather than facts. These big-government experiments have ended in failure, harming the very people the far left says it wants to help.

I’m not questioning people’s intent when they first put these policies in place, but after decades of experimenting, the outcomes have become evident. And they’re not good. People are suffering from the unintended consequences of the left’s misguided compassion.

It’s about time that we ended the suffering and implemented an urban agenda that works. We have the ability to put in place policies that can achieve the eradication of poverty, job growth, positive educational outcomes, and strong families originally intended, but we can do it in proven ways that actually work. The good people who live in these communities deserve nothing less.

Such an agenda must be based on the very building blocks of a civil society: family, faith, education, and community.

First, we must ensure that we’re encouraging families to stay together and that fathers and mothers raise their children together.

Decades of studies have shown that children raised in single-parent homes are statistically more likely to abuse drugs and alcohol, exhibit poor social behaviors, and commit violent crimes. They’re also more likely to drop out of school, which often leaves them struggling to find good-paying jobs as adults.

We could go a long way toward strengthening inner-city families by changing the system of government assistance that routinely weakens them.

As a child of welfare, I can tell you that an overreliance on government assistance has deprived millions of children of the love and security they would have gotten from a family with two parents.

I saw welfare take the place of the family breadwinner, so fathers didn’t feel the need to stay with and support their children.

I saw children who grew up without both parents who started having trouble in school and who got in trouble with the law. I saw fatherless teens look to drugs and street gangs to fill the void.

I saw dependence take the place of work.

I saw poverty passed down from generation to generation as children followed in their parents’ footsteps.

Regardless of what the federal government chooses to do or not do, states have the ability to reform their welfare systems.

When I was secretary of the Virginia Department of Health and Human Resources, we took on statewide welfare reform. While providing a safety net for those who truly needed it, we limited the amount of time able-bodied people could be on welfare, we created work requirements, and we helped recipients learn new skills and find jobs so they could stop being dependent on the state.

We replaced dependency with independence, which not only lifted people out of poverty, but also restored families and brought back pride, self-respect, and a sense of personal responsibility.

Churches also provide a sense of community, shared values, and a safety net for those in physical, spiritual, and emotional need.

We must stop the attacks on religious liberty, we must stop pushing churches out of desperately needed human services work, and we must end the marginalization of the truly positive role that faith plays in our communities.

Another cornerstone of civil society is education. Failing urban schools deprive our children of discovering the potential of their own minds, of proper socialization, and of future career prospects.

School choice programs allow families to take a portion of the money that the public school system spends on their children and use it to choose better public schools, charter schools, or private schools that best meet their educational needs.

In states such as Arizona, Indiana, and Florida that have school choice, children who were once assigned to schools that were failing or weren’t the right fit for them are now succeeding.

Moreover, choice has created competition and increased accountability in public school systems, making them more responsive to parents and community needs, which has created a better educational experience for those who choose to stay in them.

An urban agenda must also include jobs because a job is one of the most effective antidotes to poverty. We create the greatest prosperity when government reduces taxes and onerous regulations on businesses so they have the freedom and the money to invest, grow, and create more and better-paying jobs.

As we’ve seen on a national scale with recent federal tax cuts and deregulation, unemployment in general—and among minority communities in particular—is at record lows. Moreover, the lowest-income workers have seen the biggest percentage increases in pay.

A successful urban agenda also includes returning to Law Enforcement 101: actually punishing criminals so that offenders get locked up and other would-be offenders are deterred from committing crimes in the first place.

Whoever told the politicians that minority communities wanted to tolerate thieves and violent criminals roaming their neighborhoods?

The most powerful solution to stopping crime doesn’t rest with the police, though—it begins at home. While it’s important to ferret out the bad apples in our police departments, it’s equally important for parents to teach young people respect for authority and the rule of law.

The current breakdown in respect for authority has not only led to confrontations with police, but with teachers, principals, and even parents themselves. It has led to neighborhoods that are becoming more and more uncivil and dangerous for everyone who lives there.

This is just a start on some of the solutions that could create a turnaround for Baltimore—and for all of America’s inner cities.

The left has tried decades of its experiments with miserable results. It’s time to try policies that will actually strengthen families and create good jobs, better educational opportunities, and safer communities.

We have to do it before we lose more Ashleys and yet another generation to the poverty, crime, and despair of the inner city.

At least this latest controversy has brought these problems front and center in the American conscience. Let’s finally be mad enough about the way things have been done that we’re now willing to do them differently.

Let’s end the political partisanship, roll up our sleeves, and get to work.

This commentary was first published at Foxnews.com.