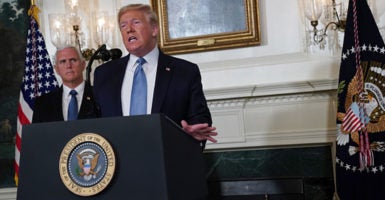 “Open wounds cannot heal if we are divided. We must seek real bipartisan solutions,” Trump said. “We have to do that in a bipartisan manner that will truly make America safer and better for all.”

Speaking from the Diplomatic Reception Room of the White House in his first formal address since the two shootings, which also left more than 50 wounded or injured, Trump talked about a culture of violence pushed by social media and video games and about making reforms to mental health care.

“These barbaric slaughters are an assault on our communities, an attack upon our nation and an attack against all humanity,” Trump said. “We are outraged and sickened by this monstrous evil, the cruelty, the hatred, the bloodshed, and the terror.”

Police said a 21-year-old gunman killed 22 and wounded or injured 24 others Saturday at a Walmart in El Paso, Texas. Within 13 hours, police said a 24-year-old shooter killed nine and injured or wounded 27 others early Sunday in a nightlife section of Dayton, Ohio.

In one voice, our nation must condemn racism, bigotry, and white supremacy. These sinister ideologies must be defeated. Hate has no place in America. Hatred warps the mind, ravages the heart, and devours the soul.

Trump laid out five policy proposals. The fourth is potentially the most controversial, as proposals to expand background checks for gun purchasers have failed in Congress before.

“We must make sure that those judged to pose a grave risk to public safety do not have access to firearms and that if they do, those firearms can be taken through rapid due process,” Trump said. “That is why I have called for red flag laws, also known as extreme risk protection orders.”

Trump said he directed the Justice Department to draft a proposal for Congress to consider, “ensuring that those who commit hate crimes and mass murders face the death penalty and that this punishment be delivered decisively, quickly, without years of needless delay.”

Trump said “mental illness and hatred pull the trigger, not the gun.”

“We must reform our mental health laws to better identify mentally disturbed individuals who may commit acts of violence and make sure those people not only get treatment but when necessary involuntary confinement,” the president said.

Trump also referred to actions that could be taken without Congress.

The president said the “monster” who shot and killed 17 at a school in Parkland, Florida, in February 2018, had numerous red flags that school officials and local law enforcement ignored.

“We must do a better job of identifying and acting on early warning signs,” Trump said. “I am directing the Department of Justice to work in partnership with local state and federal agencies, as well as social media companies to develop tools that can detect mass shooters before they strike.”

Trump was less specific about violent video games, but noted the need for awareness.

“We must stop the glorification of violence in our society. This includes the gruesome and grisly video games now commonplace,” Trump said. “It is too easy now for troubled youth to surround themselves with a culture that celebrates violence. We must stop or substantially reduce this, and it needs to begin immediately.”

Trump made a gaffe in the speech that drew ridicule on Twitter when he said, “May God bless the memory of those who perished in Toledo,” instead of saying Dayton.

Trump noted that Congress last year passed a bipartisan school safety bill, and stressed that Washington could rise to the occasion again.

“If we are able to pass great legislation after all of these years, we will ensure that those who were attacked will not have died in vain,” Trump said, later adding: “There is so much more that we have to do. Now is the time to set destructive partisanship aside. So destructive.”