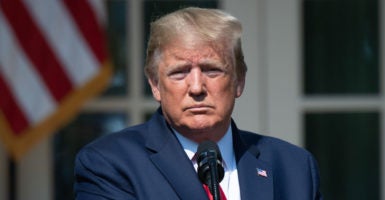 The order from U.S. District Judge Carl Nichols, a Trump appointee, came Thursday in agreement to a proposal from the state that would allow it to challenge Nichols’ jurisdiction over the issue, Politico reported.

The order will block any House Ways and Means Committee requests for Trump’s tax returns via the New York law until the jurisdictional dispute is resolved.

The Trump administration filed a lawsuit July 23 arguing New York violated the president’s constitutional rights when it passed legislation earlier in the month to give the Democrat-controlled Ways and Means Committee access to the president’s state tax returns, according to Reuters.

Nichols said during a court hearing Wednesday in Washington, D.C., that “Mr. Trump cannot suffer any harm” until the issue is resolved, the Washington Examiner reported.

“I continue to expect that while I have this under advisement actions won’t be taken to moot this,” the judge said.

New York attorney Andrew Amer told the judge Wednesday that his clients think the D.C. court does not have authority over the case, and he would try to move it elsewhere or have it dismissed entirely.

The order to block New York from turning over the president’s tax returns is an alternative way around a different proposal from Trump that would require the Ways and Means committee, a defendant in the lawsuit by the Trump administration, to notify the court when making a request for the records.

Another hearing will take place Aug. 29 in Washington to decide whether Nichols has jurisdiction over the New York officials named as defendants in the president’s lawsuit, according to Reuters.

The judge’s order came two days after California Gov. Gavin Newsom, a Democrat, signed into law a measure to require Trump to submit at least five years of his tax returns to qualify for California’s primary ballot.