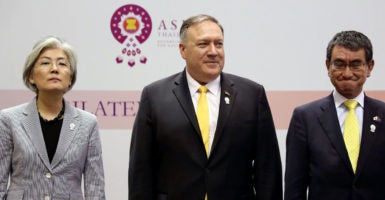 BANGKOK—Brushing aside repeated entreaties from U.S. Secretary of State Mike Pompeo for a meeting, North Korea was a no-show at a diplomatic forum in Bangkok.

The snub didn’t deter Pompeo from holding out hope that Pyongyang soon will come back to the table and resume denuclearization talks.

Nevertheless, going into the forum Thursday, Pompeo said he and U.S. Special Representative for North Korea Stephen Biegun, also in Bangkok this week, were both ready to resume talks with Pyongyang.

“We stand ready to continue our diplomatic conversation with the North Koreans,” Pompeo told reporters at a joint news conference Thursday with Thailand’s foreign minister. “I regret that it looks like I’m not going to have the opportunity to do that while I’m here in Bangkok, but we’re ready to go.”

Pompeo’s arrival in Asia on Wednesday was met by news of a North Korean missile test—coming just days after Pyongyang tested two KN-23 missiles. Then on Friday, despite Pompeo’s calls for a meeting in Bangkok, North Korea conducted another missile test—its third in one week.

“The diplomatic path is often fraught with bumps,” Pompeo said during a speech Friday, adding that behind-the-scenes communications were ongoing between the U.S. and North Korea.

“Lots of conversations are taking place,” Pompeo said, adding that diplomacy is “the right approach.”

While not a member of the Association of Southeast Asian Nations Regional Forum, the U.S. is a strategic partner to the 10-nation bloc and part of the East Asian Summit, which includes the core ASEAN countries along with eight others, among them China and Russia.

In the past, North Korean officials have attended the ASEAN Regional Forum, too. This week, however, Pyongyang sat out the event.

Yet the secretary of state tried to salvage the opportunity to renew dialogue, making clear he was willing to talk.

“We don’t anticipate that the North Koreans will be at the event in Bangkok, but if they are, I’d look forward to the chance to meet with Foreign Minister Ri Yong Ho,” Pompeo told reporters Tuesday en route to Bangkok. “We’ll see if they are there, and if they are there, I am confident we’ll meet.”

Pompeo met Thursday with Chinese Foreign Minister Wang Yi. The two “reaffirmed their commitment to the complete denuclearization of North Korea and the need for North Korea to return to negotiations,” State Department spokeswoman Morgan Ortagus wrote in an emailed statement.

China’s special representative for North Korea was not in Bangkok for the week’s summit, although Biegun spoke to his Chinese counterpart by phone, officials said. Despite a laundry list of disputes with China, U.S. officials say that denuclearizing North Korea remains one issue on which the two countries see eye to eye.

“There is one area that is clearly an exceptional case of cooperation between the United States and China, and that’s North Korea,” a senior State Department official told reporters Friday in Bangkok.

President Donald Trump and North Korean leader Kim Jong Un first met in Singapore in 2018, launching an American-led diplomatic effort to get North Korea to give up its nuclear weapons.

A follow-up summit between Trump and Kim in Hanoi in February broke down and sent both sides back to their corners. Talks stalled until Trump and Kim met during a hastily arranged trip to Panmunjom on the inter-Korean border in June.

That meeting sparked hopes of renewed talks and a resumption of North Korea’s progress toward denuclearization. But months later little, if any, progress has been made.

“Not just with countries like Japan and South Korea, who are long-standing allies of the United States, but even in discussions with the Chinese and with the Russians,” the official said. “It’s clear that there’s strong alignment.”

U.S. officials also downplayed an ongoing trade feud between Japan and South Korea, saying it had no effect on the two countries’ security cooperation with the U.S. on North Korea.

“With Japan and South Korea, in fact, cooperation on North Korea is uninterrupted and has been unaffected by tensions in other parts of their relationship—demonstrating that both countries, when they see their national interests coinciding, are still capable of working together,” a senior State Department official told reporters Friday in Bangkok.

State Department officials say Trump remains committed to diplomacy and is hoping for a breakthrough with North Korea soon. Yet the U.S. is playing the long game, those officials say, looking for a realistic pathway to denuclearization and a durable de-escalation of hostilities—not just a short-term win.

“We’re not in a hurry to get a bad deal,” a senior State Department official said.