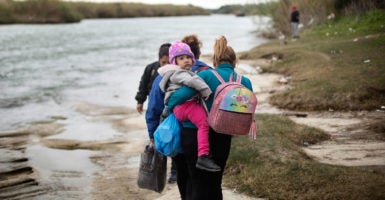 A migrant family observes the Rio Bravo to decide where to cross it. The Rio Bravo is the border between Mexico and the United States in this border city of Piedras Negras. (Photo: NurPhoto/Getty Images)

In a court filing, the American Civil Liberties Union accuses the Trump administration of separating nearly 1,000 migrant children at the U.S.-Mexico border after a court order to end the practice.

“The American Civil Liberties Union asked a federal judge today to block the Trump administration from continuing to separate hundreds of families in defiance of a previous court order. More than 900 parents and children—including babies—have been separated since the court granted a nationwide injunction over a year ago,” the ACLU said Tuesday in a written statement.

President Donald Trump, facing a media firestorm for his administration’s “zero tolerance” policy against illegal immigration, signed an executive order in June 2018 that essentially ended the separation of children from their parents.

In California, U.S. District Judge Dana Sabraw that same month issued a ruling that prohibited most family separations, and called on the government to reunite families that had already been separated.

Sabraw added that there are situations where child separations are still warranted, such as when a parent or adult guardian poses a risk to the child. Border Patrol agents can adhere to this stipulation if a migrant parent touts a criminal record.

However, the ACLU is claiming that the Trump administration has separated 911 children and babies in the 12 months since the court order and has been able to do so by citing not-so-serious reasons, such as DUIs, forgeries, and mere allegations.

“Defendants are even separating young children based on such offenses as traffic violations, misdemeanor property damage, and disorderly conduct violations. Some of the separations are for offenses that took place many years ago,” read a portion of the liberal legal organization’s court filing.

In another example, the ACLU cited an instance where a parent was separated because of a conviction for “malicious destruction of property value for $5” and received a six-day jail sentence along with probation.

Customs and Border Protection did not respond to a request for comment from The Daily Caller News Foundation.

Nevertheless, the ACLU filing showed where parents were separated following revelations of past criminal activity. More than 670 separations were based on criminal records, including 44 cases where the parent or adult had previously been charged with assault.

The number of child separations is also a reflection of the high volume of illegal migrant families reaching the border.

A total of 390,308 members of family units have encountered Border Patrol agents this fiscal year, according to Customs and Border Protection data. The number exemplifies the extremely small percentage of illegal alien families that are actually subjected to separation.

A recent report by Republican members of the House Oversight and Reform Committee found that, of the nearly 3,000 migrant children separated before the White House nixed the policy, 95% of them have since been reunited with their families.