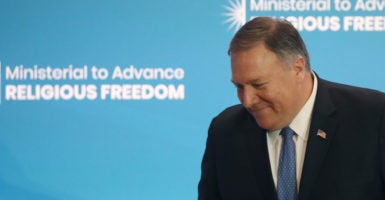 Mark Green is the administrator of the United States Agency for International Development, or USAID.

For Americans, religious liberty is in our DNA. The pursuit of that freedom is what brought the Pilgrims to our shores nearly 400 years ago.

Thomas Jefferson, author of the Declaration of Independence, believed so strongly in religious liberty that he authored Virginia’s Statute for Religious Freedom, and when it became law, he called for it to be translated into multiple languages and widely distributed.

We see that same spirit in the appearance of religious freedom in the very first line of our Constitution’s Bill of Rights—perhaps because our Founding Fathers saw religious liberty as giving meaning to all of our other freedoms.

That’s why the Trump administration has welcomed, listened to, and defended faith communities like no other White House has before.

Last week, at the second ever Ministerial to Advance Religious Freedom, more than 1,000 people from over 130 countries gathered to celebrate that commitment.

It was a needed show of solidarity. In today’s world, too many people in too many places suffer violence and persecution merely for practicing their faith.

We see it in Europe, where the old scourge of anti-Semitism has once again reared its ugly head and Jews face harassment and violence.

We see it in Sri Lanka, where a series of church bombings on Easter Sunday killed 259 people.

We see it in New Zealand, where 51 people lost their lives and scores more were injured during horrific shootings at two mosques.

In the U.S., we’re hardly immune. Last October, 11 worshippers were killed, and seven others injured in a shooting at a Pittsburgh synagogue.

What’s even worse is that religious intolerance and persecution has effectively become official policy in some places in the world.

In Burma, government security forces attempted to ethnically cleanse the country of its Muslim Rohingya population, prompting more than 750,000 to flee to Bangladesh. Most of those left behind have been forced to live in what can only be described as prison camps.

Since Russia illegally took control of Crimea, the Tatar community has faced ever greater repression and harassment. It’s increasingly dangerous for them to practice their culture, speak their language, or observe their Muslim faith.

In China, 11 million Uighur Muslims have been treated brutally. Many have been forced into government-sponsored reeducation camps. Beijing seems determined to strip workers of their individuality, their identity and, yes, their faith.

In northern Iraq, ISIS has committed genocide against Christians, Yazidis, and other religious minorities. ISIS sought to wipe them from the face of the earth even though they’ve been a vibrant part of the region’s cultural mosaic for countless centuries.

President Abraham Lincoln once said that he felt sorry for the man who can’t feel the whip when it is laid on another man’s back.

Thanks to President Donald Trump and Vice President Mike Pence, the U.S. Agency for International Development and others are working to offer relief and assistance to those who have suffered so much.

The U.S. is providing a lifeline of assistance to the Rohingya who remain in Burma. We’re also supporting those who have fled to Bangladesh and the communities that host them.

At the ministerial, so many countries stood up for freedom of religion. But each of us knows in our hearts that there is more we must do to show a doubting world what religious liberty can and should mean.

In the Gospel of Luke, the crowds call out to John the Baptist asking, “What then shall we do?” He answers by saying that whoever has two tunics should share with him who has none, and whoever has food should do the same.

The Trump administration continues to affirm our support for the freedoms enabling us to meet openly and to speak openly about the importance of faith in our communities and in our countries.

Editor’s note: This commentary is excerpted from the author’s remarks at the State Department’s second Ministerial to Advance Religious Freedom.