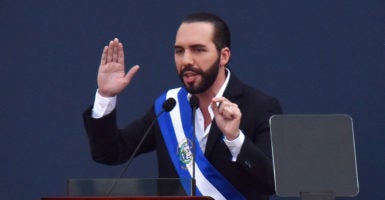 Matthew Prillman is a member of the Young Leaders Program at The Heritage Foundation.

Nayib Bukele, El Salvador’s new president, has his work cut out for him.

He has pledged to lift the economy, reduce outward migration, reverse his predecessor’s hostile foreign policy, and reduce violence in his country, which is some of the highest in the world.

Whether he succeeds is of great importance to Washington.

El Salvador is a key transshipment point for U.S.-bound drugs, a hub for human trafficking networks, and one of the largest sources for unlawful migration to the U.S.

The U.S. and El Salvador are parties to the U.S.-Central America-Dominican Republic Free Trade Agreement, which promotes regional trade, cooperation, and transparency through open markets and elimination of tariffs. More than 200 U.S. companies have established a presence in El Salvador.

Bukele’s first steps are encouraging. The prior administration called for negotiations with gangs. Bukele quickly scrapped this policy.

Gang leaders often run crime networks from inside prisons. Bukele’s administration has blocked the mobile phone and internet signal in prison facilities and ordered a permanent state of emergency in the country’s correctional facilities.

He’s ordered prison authorities to rotate gang members through different prisons and facilities to reduce their opportunities to corrupt prison officials, and he has improved vetting of custodial staffing.

Bukele also is sending positive signals on foreign policy. He did not invite the authoritarian president of Nicaragua nor the illegitimate regime of Venezuela to his inauguration. He also intends to revisit his predecessor’s decision to drop recognition of longtime ally Taiwan in favor of the People’s Republic of China.

Bukele delivered his first public speech after his electoral victory at The Heritage Foundation, where he expressed his intention to revamp El Salvador’s relationship with the U.S. and pointed out shared values between the two nations.

Not everyone is on board for his reform agenda. Critics claim he is abusing his power and that his use of social media is needlessly antagonistic.

Washington needs Bukele to succeed, but he faces steep odds. El Salvador’s economy is expected to grow only about 2% this year, not enough to absorb entrance into the labor force. Unemployment rates are expected to reach nearly 7% in 2019, which could increase the likelihood for outmigration.

His anti-corruption campaign disrupted the traditional two-party system that has ruled the country for 30 years. Until the 2021 elections, he will lack a majority in Congress, which means he and his political opponents must find room for compromise.

The Trump administration is already working hard to support its new ally in El Salvador.

Secretary of State Mike Pompeo met recently with Bukele in San Salvador. Bukele pledged his administration would improve conditions in his country to reduce unlawful migration to the United States, and the two agreed to expand cooperation on drug trafficking and economic matters.

During the meeting, Pompeo noted that El Salvador “can be a model on immigration,” and the two countries signed an agreement to extend the operation of a joint anti-drug monitoring center for five years.

Then in July, acting Secretary of Homeland Security Kevin McAleenan met with Bukele to develop a regional action plan to improve security and tackle the root causes of outmigration. And in early June, Commerce Secretary Wilbur Ross met with Bukele, his foreign minister, and business leaders to discuss strategies to improve the investment climate.

Private donors are playing a role as well. Earlier this month, the Howard Buffett Foundation announced it will fund the construction of the Forensic Investigation Center of the Division of Scientific Technical Police—a $25 million facility that Bukele said would make El Salvador “the envy of the region.”

Bukele calls Washington “our natural no. 1 ally.” The Trump administration has shown a willingness to cooperate with El Salvador’s like-minded president and should continue to do so.

Bukele faces an uphill battle, but he seems poised to put his country on a positive trajectory.