Understanding Why ‘the Squad’ Screams ‘Racism’ 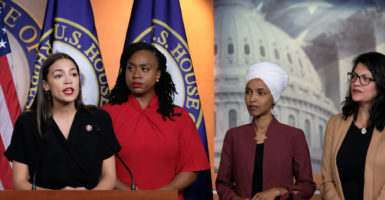 Rep. Alexandria Ocasio-Cortez, D-N.Y., addresses remarks made by President Trump on Twitter about how "the Squad" should “go back and help fix the totally broken and crime infested places from which they came.” Pictured: Ocasio-Cortez with Demoractic Reps. Ayanna Pressley of Massachusetts, Ilhan Omar of Minnesota, and Rashida Tlaib of Michigan during a July 15 press conference at the U.S. Capitol. (Photo: Alex Wroblewski/Getty Images)

Unfortunately, the U.S. House of Representatives is starting to look more and more like America’s universities.

Freshmen show up not to learn, but to teach. They think they already know it all and see their personal mission is to set straight the faculty, the university administrators, and the world.

So we see it with “the squad,” the now-famous far-left freshmen four in the House–Alexandria Ocasio-Cortez, Ilhan Omar, Rashida Tlaib and Ayanna Pressley–who believe they have been elected to a first term in Congress to reinvent what they think is a failed America and set straight the leadership of their party and the nation.

Fortunately, most Americans do not share this highly vocal four’s negativism about America. In a new Gallup poll, 70 percent agreed with the statement “If you work hard and play by the rules, you will be able to achieve the American dream in your lifetime.”

Even a significant majority–61 percent–of households earning less than $40,000 agreed.

It goes without saying that immigration is a high-priority issue on the national agenda because millions from around the world want to come here. There is no more sought-out destination than the USA, and the reason is that no nation in the world offers more opportunity.

So why is this dubious group of naysayers commanding such attention?

The first rule on the list of “Rules for Radicals,” authored by famed left-wing community organizer Saul Alinsky, is “Power is not only what you have but what the enemy thinks you have.”

Our age of technology and social media adds immeasurable power to Alinsky’s advice to gain attention way beyond the support you actually have.

Another Alinsky rule, “Ridicule is man’s most potent weapon,” provides the ammunition.

These four young freshmen Democrats have no interest in a public discourse of deliberation where we soberly seek what is true and what really works. Their only interest is selling their dogma.

So, following the advice of Alinsky, they get attention not by developing quality ideas for public policy reform and engaging in thoughtful discourse about these ideas, but through sensational hype of dogma and character assassination of those who disagree.

As a result, the discussion is not about the merits of the socialism they are selling, about their big-government answers to health, housing, education, and lifting up the poor, but about answering their charges that anyone who does not agree with them is a racist.

Attacking the messenger, rather than discussing the message, is a well-established tactic of those whose aspiration is political power rather than seeking truth.

Demagoguery is an age-old threat to freedom and the democratic process. There will always be those who long for power and will try to get it with heat rather than light.

There is only one weapon I am aware of to fight this. And that is doing the hard work to inform people and get the truth to them.

The opposition to socialism, support for freedom, is not about being racist.

This is not dogma. There’s tons of research and data that supports this conclusion.

And it is this that has made and makes the USA so great.

The task is particularly formidable among our youth, where so many have abandoned traditional faith, and among our poor, where the harshness of life increases susceptibility to political demagoguery.

It is no contradiction to say our country and its tradition of freedom is what makes us great but to also be open and honest about how we have problems.

Most of these problems–fiscal problems and social problems–are manifest in areas where we have departed from our tradition of freedom and allowed big-government answers into our lives.

Don’t agree? This is the discussion we will have in 2020.