How America Is Boosting Religious Freedom Across the Globe 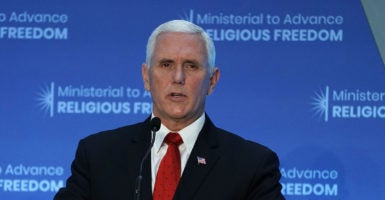 When people wonder if events like the State Department’s ministerial work, the evidence is sitting right in front of them.

This time last year, Pastor Andrew Brunson was locked away under house arrest in Turkey—his fate completely uncertain. In fact, one of the most enduring memories of last July’s gathering was his daughter, Jacqueline, making an emotional plea for his release.

Twelve months later, it was Brunson speaking in front of the crowd—living proof that this administration’s commitment to religious freedom matters.

“For me to be back with my wife and my children,” Brunson said, still in awe, “this is what I wanted.”

“It’s wonderful,” he smiled, “that I can be here in person and I’m free. And I’m very grateful for that.”

So are the millions of people just like him, who take Brunson’s freedom as a sign that the United States will fight for them, too.

In his speech Thursday, Vice President Mike Pence credited God’s great kindness in bringing Brunson home, but I can personally attest from my involvement in Brunson’s release that the vice president was right to say that it took a leader like President Donald Trump to carry out the work.

“Pastor Brunson’s story of perseverance in the face of incredible hardship was an inspiration to people across our country and believers around the world,” the vice president insisted. “And we express our admiration to him from the bottom of our hearts [for] being an example of faith that is ‘like gold tested in fire.'”

As the world knows from watching the last few days, Brunson isn’t the only one with a powerful testimony. All week long, one survivor after another pulled at our hearts with agonizing stories that Secretary of State Mike Pompeo and Ambassador Sam Brownback are determined no one—on their watch—will repeat.

As the secretary told me on “Washington Watch” earlier in the week, “We don’t want this event to be a one-off where we all congratulate ourselves for having a good week here in Washington.” This is about permanent, lasting change.

Rep. Chris Smith, R-N.J., who spent years as a lonely voice in the wilderness for these millions of hurting people, knows how important the moment is.

“This is a game-changer,” he told me. No one can listen to these victims, who suffered unimaginable horrors, and go home unaffected. ‘They [will] go back,” he predicted, “energized as never before to promote this First Freedom.”

And that matters, because, as so many leaders have reiterated throughout the week, “If [they] do get this right, so many of the other aspects of [their] country in terms of due process of law, other human rights are usually not far behind. This is the one that … make[s] all the difference in the world.”

And based on what the vice president shared, it already is. Since the 2018 ministerial, the Genocide Recovery and Persecution Response Program—helping the people of Nadia Murad and so many others—has donated more than $340 million in aid to religious minorities persecuted by ISIS in the Iraqi region.

Pence also shared that the State Department also has more than $5 million in pledges for the International Freedom Fund that’s given 435 “rapid-response grants” to people undergoing intense persecution.

But there are also new developments—significant ones for the 106 countries represented in Washington this week.

To cap off the last day of the ministerial, Pompeo announced a new International Religious Freedom Alliance that will help give America’s partners a way to circumvent the bad actors at the U.N. and confront major challenges and enemies of faith.

As he explains it, the alliance will focus on “new sanctions against foreign military officials supporting countries the U.S. considers to be instigators of religious persecution.”

Which, interestingly enough, set the stage for America to dole out some stiff punishments of its own.

To prove how serious U.S. officials are on the issue, Pompeo rolled out brand new sanctions on some of Myanmar’s top military officials for their gross abuse of the Rohingya Muslims.

Religious freedom activists have been begging for targeted sanctions against the individuals responsible for persecution like this, and it rarely happens. So for the Trump administration to make a point of holdings this general and his three senior officers accountable is proof of how seriously it takes this new effort.

Also, in Iraq, where women like Murad bravely crusade for the thousands of girls sold into sex slavery, the U.S. has just handed down equally stiff punishments for two Iraqi militia leaders and two former Iraqi governors for human rights abuses.

In its statement, the U.S. Treasury Department pointed to a video that’s been circulated since 2018 of an Iraqi military officer cutting off the ear of a handcuffed detainee. That’s on top of crimes like extortion, robbery, kidnapping, rape, and harassment.

The United States, Pence warned, will not stand by while violent regimes spread terror. “We will hold them accountable.” And that, thanks to last week’s ministerial, is accelerating.