As Democrats Attack Trump as ‘Racist,’ He Defends ‘Go Back’ Tweets 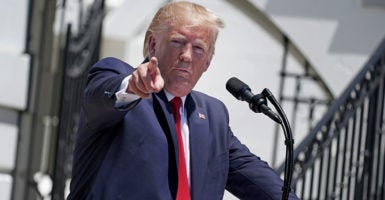 President Donald Trump takes questions from reporters Monday outside the White House, a day after tweeting that unnamed "progressive" congresswomen should “go back” to their countries of origin if they don't love America. (Photo: Chip Somodevilla/Getty Images)

President Donald Trump defended tweets that suggested unnamed congresswomen “go back” to their countries of origin, but House Democrats planned to introduce a resolution to denounce his remarks as racist.

Republican lawmakers also criticized the president after he didn’t back down from the tweets.

Trump, speaking to reporters Monday at a White House event, noted that he “didn’t mention names” in his tweets Sunday. He defended himself without taking back any of those words.

“A lot of people love it,” Trump added, apparently referring to America. “But if you’re not happy in the U.S., if you’re complaining all the time, very simply you can leave. You can leave right now. You can come back if you want; don’t come back, that’s OK, too.”

Many inferred that Trump’s tweeted reference to “‘Progressive’ Democratic Congresswomen” who should return to where they “came from” and “help fix” those “totally broken and crime infested places” was aimed at four House Democrats in particular: Reps. Alexandria Ocasio-Cortez of New York, Ilhan Omar of Minnesota, Ayanna Pressley of Massachusetts, and Rashida Tlaib of Michigan

And at day’s end, the four women came out swinging at a press conference on Capitol Hill in which they variously called the president a “racist,” a “white nationalist,” “corrupt,” and “weak,” and two of them specifically demanded his impeachment.

Some pundits refer to the four women, all critics of both Trump and House Speaker Nancy Pelosi, as “the squad.” Of the four, only Omar was born outside the United States.

Pressley led off the press conference by refusing to call Trump the president and by saying his tweets were “simply a distraction from the callous, chaotic and corrupt culture” of his administration.

“We are grateful for your solidarity and your encouragement in the face of the most racist, xenophobic, bigoted remarks from the occupant of our White House,” Pressley said. “I will always refer to him as the occupant, as he is only occupying space, not embodying the grace, the empathy, the compassion, the integrity that that office requires and that the American people deserve.”

Referring to the president, Ocasio-Cortez said: “Weak minds and leaders challenge loyalty to our country in order to avoid challenging and debating the policy.”

“This president operates in complete bad faith,” she said.

Omar, the other Muslim woman in Congress, also called for impeachment. She used the term “white nationalist” to describe Trump and repeated vulgar language attributed to Trump in private settings.

“Right now the president is committing human rights abuses at the border, keeping children in cages and having human beings drinking out of toilets,” Omar said. “This president, who has been credibly accused of committing multiple crimes, including colluding with a foreign government [to] interfere with our election.”

“This is a president who has overseen the most corrupt administration in our history and pursued an agenda to allow millions of Americans to die from a lack of health care,” she said.

“To distract from that,” Omar added, “he’s launching a blatantly racist attack on four duly elected members of the United States House of Representatives, all of whom are women of color. This is the agenda of white nationalists.”

Pelosi, D-Calif.—who only last week had been locked in a clash with the upstart four freshmen—tweeted later Sunday that the president’s tweets confirmed that he wants to “make America white again.”

And on Monday, Pelosi backed a resolution to condemn the president’s words in a letter to House colleagues.

“The House cannot allow the president’s characterization of immigrants to our country to stand,” Pelosi’s letter says. “Our Republican colleagues must join us in condemning the President’s xenophobic tweets. Please join us in supporting a forthcoming resolution.”

The House Democrats’ resolution is sponsored by members born outside the United States. It refers to President Ronald Reagan’s final speech as president, when the Republican standard-bearer said:

Thanks to each wave of new arrivals to this land of opportunity, we’re a nation forever young, forever bursting with energy and new ideas, and always on the cutting edge, always leading the world to the next frontier. … If we ever closed the door to new Americans, our leadership in the world would soon be lost.

No matter our political disagreements, aiming for the lowest common denominator will only divide our nation further. My full statement below: pic.twitter.com/QXuV8arXso

Many congressional Democrats and commentators called the tweets racist.

Though he said he didn’t mention names in his Sunday tweets, Trump talked specifically about past controversial remarks by Omar.

“I never met her, and I hear the way she talks about al-Qaeda. Al-Qaeda’s killed many Americans,” Trump said.

Trump referred to Omar’s much-publicized comments about the 9/11 attacks by Islamists affiliated with the al-Qaeda terrorist group, in which she said “some people did something.”

“You remember the famous ‘some people?’ These are people that in my opinion hate our country,” Trump said. “Now, you can say what you want, but get a list of all the statements they’ve made. All I’m saying is if they’re not happy here, they can leave. I am sure there will be many people that won’t miss them, but they have to love our country. These are congresspeople, and I never used any names.”

Trump continued to single out Omar, however.

“You have somebody who comes from Somalia, which is a failed government, a failed state, who left Somalia and ultimately came here, who’s now a congresswoman who’s never happy,” Trump said. “[She] says horrible things about Israel, hates Israel, hates Jews. Hates Jews. Very simple.”

Hours before the press conference Monday, Omar claimed that Trump wanted to “silence” her.

Ocasio-Cortez also ripped into the president in a tweet Monday.

Trump also referred to Ocasio-Cortez, but not by name, in citing her successful opposition to Amazon’s plan to relocate its headquarters to New York City.

“One of them kept Amazon out of New York. Tens of thousands of jobs—would have been a great thing,” Trump said. “New York has not been the same since that happened. It really hurt New York.”

This article has been updated since its initial publication.