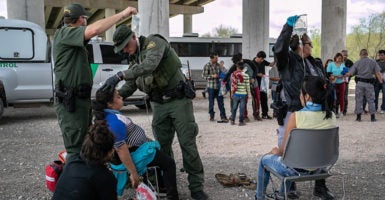 Border Patrol medics treat migrants for heat exhaustion after taking them into custody July 2 in McAllen, Texas. The migrants, mostly families from Central America, turned themselves in to border agents after rafting across the Rio Grande from Mexico to seek political asylum. (Photo: John Moore/Getty Images)

While waiting for Congress to act on closing immigration loopholes, the Trump administration is imposing a new rule to limit asylum claims by requiring professed refugees to first seek asylum in another country closer to home.

The Justice Department and the Department of Homeland Security announced the new rule for asylum-seekers, which is set to take effect Tuesday.

Asylum-seekers will be required to apply for protection from prosecution or torture in at least one other country outside their country of citizenship or nationality before entering the United States.

The rule comes as President Donald Trump tries to gain control over the southern border amid a surge of migrants from Central America.

Kevin K. McAleenan, acting secretary of the Department of Homeland Security, said the change is designed to decrease that surge.

“Until Congress can act, this interim rule will help reduce a major ‘pull’ factor driving irregular migration to the United States and enable DHS and DOJ to more quickly and efficiently process cases originating from the southern border, leading to fewer individuals transiting through Mexico on a dangerous journey,” McAleenan said in a formal statement.

The Trump administration contends it has the flexibility to place the restriction on asylum-seekers under the congressionally passed Immigration and Nationality Act, which allows additional limitations on eligibility for aliens who seek asylum in the United States.

“Ultimately, today’s action will reduce the overwhelming burdens on our domestic system caused by asylum-seekers failing to seek urgent protection in the first available country, economic migrants lacking a legitimate fear of persecution, and the transnational criminal organizations, traffickers, and smugglers exploiting our system for profits,” McAleenan said.

A high number of meritless asylum claims has overwhelmed the Border Patrol. Only a small minority of recent asylum-seekers are granted asylum when their case is adjudicated, but many avoid detention and are able to escape into the interior of the country.

A federal appeals court previously upheld the Trump administration’s policy of sending Central American asylum-seekers to Mexico while their asylum requests are being adjudicated.

“This rule is a lawful exercise of authority provided by Congress to restrict eligibility for asylum,” Attorney General William Barr said in a prepared statement.

Barr said this would deter phony asylum claims “while ensuring that no one is removed from the United States who is more likely than not to be tortured or persecuted on account of a protected ground.”

“The United States is a generous country but is being completely overwhelmed by the burdens associated with apprehending and processing hundreds of thousands of aliens along the southern border,” the attorney general said.

The administration is making three exceptions to the new rule that apply when an asylum-seeker demonstrates he or she applied for protection in another country and was denied; is a victim of trafficking; or is someone who traveled to the U.S. only through countries that were not parties to two agreements (the 1951 Convention on the State of Refugees and the 1967 Convention Against Torture and Other Curel, Inhuman or Degrading Treatment or Punishment).

The recent surge of illegal immigrants, mostly from Guatemala, Honduras, and El Salvador, has flooded into border states such as Texas, Arizona, New Mexico, and California.

Under the new rule, the asylum-seekers from these countries first would have to apply for asylum in Mexico or other nations they pass through en route to the United States.

Administration officials previously asserted that economic migrants are making bogus asylum claims to enter the United States. Officials and commentators also have argued that the United States is not the only country that can offer protection from persecution.

The regulation is well within DHS authority under existing federal law, said Hans von Spakovsky, a senior legal fellow at The Heritage Foundation.

“It seems obvious that aliens who wait to claim asylum until they arrive at our shores and didn’t take the opportunity to claim asylum in any other country they traveled through that has an asylum statute [do] not have a credible claim,” von Spakovsky told The Daily Signal.

“This is exactly the same rule that the European Union applies to asylum- seekers—they have to claim asylum in the first EU country they enter. This change in U.S. procedures has been long needed.”