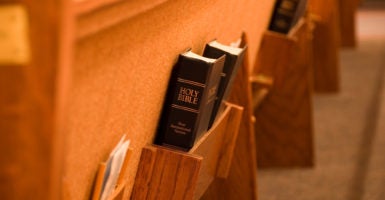 The FBI tracked the ISIS supporter for months before foiling his attack on a church. (Photo: stester/Getty Images)

Authorities last week arrested Mustafa Alowemer, a Syrian refugee who was planning a terrorist attack against a church in Pittsburgh in accord with his allegiance to ISIS.

Thankfully, the FBI had been monitoring his behavior for months and was able to arrest him before the public was put in any danger.

This plot is the 112th Islamist terror plot or attack since 9/11 and raises questions about the security of the U.S. refugee admissions program.

Alowemer, 21, who lives in Pittsburgh and came to the U.S. in 2016 as a Syrian refugee, was arrested on June 19, following an undercover operation conducted by the FBI Pittsburgh Joint Terrorism Task Force.

He is charged with one count of attempting to provide material support and resources to the Islamic State of Iraq and al-Sham and two counts of distributing information relating to an explosive, destructive device or weapon of mass destruction.

Law enforcement discovered Alowemer in April 2018 and made contact with him through social media in March of this year through an undercover FBI employee who posed as a fellow ISIS supporter.

Through online messaging, Alowemer expressed his desire to carry out a jihadist attack in support of ISIS and inquired about how to obtain weapons and bomb-making materials for his attack.

He met with the undercover agent on four occasions to scope out targets in the city and discuss specifics regarding weapons to be used.

In addition to these meetings, Alowemer sent ISIS propaganda to the undercover agent on numerous occasions, including instructions on how to construct explosive devices.

He printed maps displaying his target, visited the site multiple times, and constructed a handwritten, 10-point plan describing how the attack would take place. He planned to use a remotely detonated backpack bomb.

Alowemer expressed his desire to secure revenge for the killing of ISIS supporters in Nigeria, which led to his settling on the specific church he targeted because of its Christian Nigerian congregants.

The criminal complaint notes that “he indicated on multiple occasions that he knew his current and planned activities in support of ISIS were illegal and, therefore, could result in his arrest.”

This appears to be the first terror plot carried out by someone who was a terrorist supporter when he passed through U.S. refugee vetting.

There have been some refugees who became radicalized after coming to the U.S. and sought to engage in terror attacks.

On the other hand, the U.S. has seen fewer cases where a terrorist supporter got through U.S. vetting and went on to commit various terrorism-related crimes, though until this case not plots against the U.S. homeland.

We use “appears” because we can’t be sure about certain details, but this incident does appear to point to a failure of the refugee vetting system.

The FBI provided in its criminal complaint messages that Alowemer wrote to the undercover agent.

In these messages, Alowemer told the agent that he was “raised in Jordan on loving Jihad and the Mujahadeen. I met some Jordanian brothers, some of which did the Nafir [answering the call for violent jihad] in Raqqah, and I, alongside some brothers, were arrested three times in Jordan, because I was one of the supporters.”

There is more to learn about Alowemer, but we know he came here in August 2016, at the height of the Obama administration’s surge to accept more Syria refugees.

At the time, experts at The Heritage Foundation were concerned by such efforts and recommended the U.S. “avoid speeding up the resettlement process except in extreme cases.”

That recommendation, and others made by Heritage experts, remains true today in light of this story.