E. Jean Carroll Says She Has ‘Not Been Raped’ Following Accusation Against Trump 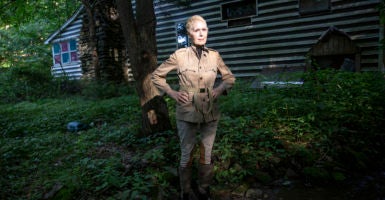 Columnist E. Jean Carroll said she doesn’t consider herself to be a victim and has “not been raped” after she alleged President Donald Trump had sexually assaulted her in the 1990s.

Carroll, 75, accused Trump of sexually assaulting her when she was 52 at a Manhattan Bergdorf Goodman dressing room. The accusation came ahead of her upcoming book “What Do We Need Men For? A Modest Proposal.” An excerpt of that book describing the alleged sexual assault was published in New York Magazine on June 21.

Various media outlets have interviewed Carroll since the allegation. Most recently, she told The New York Times’ “The Daily” that she isn’t a victim and has “not been raped.”

In Carroll’s account of the alleged incident, however, she said Trump shoved her against a wall inside of the dressing room, pulled her tights down, and penetrated her.

Trump was “forcing his fingers around my private area, thrusts his penis halfway—or completely, I’m not certain—inside me,” Carroll wrote.

She has been vocal in not calling herself a rape victim and has suggested Trump’s alleged actions don’t qualify as rape.

“I am not faced with sexual violence every day like many women around the world, and so, yes, I’m very careful with that word [rape],” Carroll said Monday on CNN’s “New Day.”

Host Alisyn Camerota then told Carroll the scene described in her book is “legally rape,” but Carroll did not verbally reply.

In previous interviews, Carroll has said she wouldn’t bring a rape charge against Trump because it would be “disrespectful” to women on the border while on MSNBC’s “The Last Word With Lawrence O’Donnell.” She also said people view rape as “sexy” during a talk with Anderson Cooper.

Although Carroll said she has “not been raped,” two women whom she confided in have come forward publicly to corroborate her story, The New York Times reported.

Carroll has written “Ask E. Jean,” an advice column in Elle Magazine, since 1993.