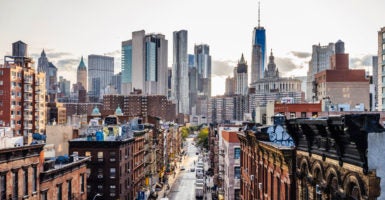 Erie County Clerk Michael “Mickey” Kearns said he will not issue licenses to illegal aliens in defiance of a new New York law, according to a local outlet.

Kearns adamantly disapproves of the Green Light Bill. He’s seeking legal representation to build a case against the state of New York and gathering protection in case he is sued.

Kearns’ letter to Erie County Attorney Michael Siragusa expressed his discontent with the law’s “inconsistency to federal law.” He also said, “I will not be granting driver’s licenses to illegal immigrants,” and he expects to be sued by the state “either way.”

Kearns is one of the most outspoken critics of the Green Light Bill in the Empire State, but public opinion appears to favor his point of view. A Siena College poll concluded that 53% of New Yorkers opposed Green Light before it became law.

“The only reason to be against this all along has been xenophobia and fear,” said Jennifer Connor, an organizer for Green Light.

“We will come after you if you don’t uphold the law because of racism and xenophobia,” Connor also said.

Kearns told a local outlet that Green Light is a direct violation of the Immigration Reform and Control Act of 1986, which gave illegal immigrants the opportunity to obtain legal status in exchange for barring them from government welfare assistance.

Another argument he brought up was the absence of funding for training. He says his office will not be able to read or differentiate between “195 passports,” the outlet reported.

“The law is well crafted and contains ample protections for those who apply for driver’s licenses. As the state’s attorney and chief law enforcement officer, my office will vigorously defend it,” New York State Attorney General Letitia James told The Daily Caller News Foundation.