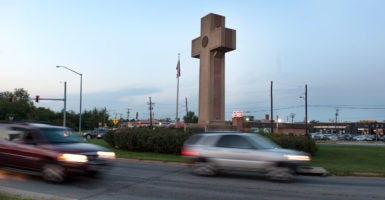 The Supreme Court decided 7-2 Thursday that a 40-foot cross erected on government land in Bladensburg, Maryland, as a memorial to those from that community who died in World War I is not an unconstitutional “establishment of religion.”

The influence of this decision on future Establishment Clause cases is unclear, however, because the seven justices in the majority split five different ways in explaining their conclusion.

America’s Founders knew, as Congress would say unanimously in 1998, the “right to freedom of religion undergirds the very origin and existence of the United States.”

This led them to include two religion clauses in the First Amendment to the Constitution, one protecting the “free exercise of religion” and the other prohibiting government’s “establishment of religion.”

When someone sues the government, claiming that it has violated the Establishment Clause, a court must do two things: interpret the clause, or figure out what it means, and apply it to the facts of the case.

Judges have two basic options for interpreting constitutional provisions such as the Establishment Clause. They either can look for what it meant from the beginning or for what they want it to mean now.

Unfortunately, since the 1930s, judges often have preferred their personal version of the Constitution over the one America’s Founders gave us.

This often leads to confusing and contradictory decisions.

One of those was the Supreme Court’s 1971 decision in Lemon v. Kurtzman, which laid out three criteria for determining when the government had established religion.

The problem is that in Lemon, and decisions like it, the court is simply making up its own meaning for the Constitution. When one three-part test or newfangled formula fails to work well, the court simply invents another one.

The American Humanist Association sued, claiming that maintaining the war memorial established religion because the cross is a clearly religious symbol. The 4th U.S. Circuit Court of Appeals agreed.

The Supreme Court reversed the appeals court by a strong 7-2 vote announced Thursday. So the cross-shaped memorial to 49 fallen soldiers will stay right where it is.

Four justices criticized Lemon’s “shortcomings,” but wanted to find a way to avoid that precedent rather than overturn it.

Breyer, joined by Justice Elena Kagan, wrote a separate opinion in which he stated that “there is no single formula for resolving Establishment Clause challenges.”

Kavanaugh, also writing a separate concurrence, observed that “this Court no longer applies the old test articulated in” Lemon and offered his own four-part replacement.

Kagan, in another concurring opinion, thought that one of Lemon’s three criteria was problematic, but the other two were “crucial in evaluating government action in this sphere.”

Justices Clarence Thomas and Neil Gorsuch agreed with the result, but not any of those rationales.

Gorsuch argued that being an “offended observer” should not be enough to challenge something like a memorial or a display as an establishment of religion. In a large and diverse country, he wrote, “offense can be easily found” but “recourse for disagreement and offense does lie in federal litigation.”

Regarding Lemon, Gorsuch characterized the much-criticized opinion as a “misadventure” and added that “not a single Member of the Court even tries to defend Lemon against these criticisms—and they don’t because they can’t.”

Thomas went a step further than Gorsuch and Kavanaugh. “I would take the next logical step and overrule the Lemon test in all contexts,” Thomas wrote, because it “has no basis in the original meaning of the Constitution.”

Instead, Thomas said, judges use it to “fit whatever result they want to reach.”

The “obvious explanation is that Lemon does not provide a sound basis for judging Establishment Clause claims,” he wrote. “It is our job to say what the law is, and because Lemon is not good law, we ought to say so.”

Many hoped that this decision, in one fell swoop, would get rid of the baggage from precedents such as Lemon. But the Supreme Court has been reinterpreting and twisting the Establishment Clause for more than 70 years, and there is a great deal to set right.

The high court did not go that far, at least not this time. But as Gorsuch put it, this is a “welcome step” in the right direction.